Trending
You are at:Home»Gadget Reviews»AMD’s Windows 8 concept tablet takes the best from Android tablets, brings Trinity power to the masses
By Gadgetman on Jul 10, 2012 · Gadget Reviews 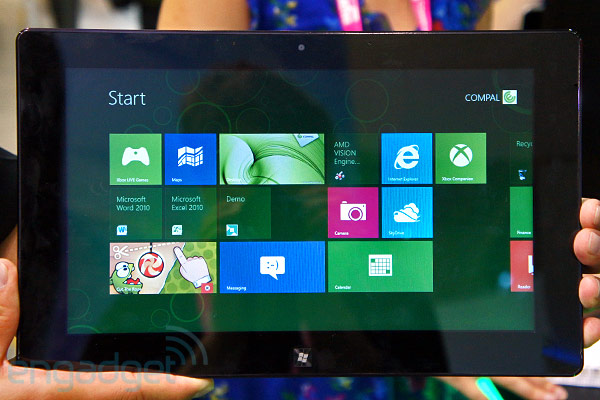 Intel is pretty much the undisputed king of the processor market, both in the desktop and mobile markets. Their six-core Xeons beat even the heavyweight 12-core Opteron (the Magny-Cours – an impressive piece of tech, which sadly doesn’t help it much), which is damn impressive and makes you wonder if AMD is out of the game for good. But the company is definitely still active, and they’ve been working hard to keep their market share and also get into the new ultra-mobile niche.

While they don’t have anything like the ultra-low power Intel Atom (not yet, anyway), they have already announced the Trinity APU, which combines a processor, chipset and graphics adapter into one small and power-efficient package. AMD plans to use them to get into the tablets market, and they have already demoed a concept tablet that shows us how the AMD-powered slates of tomorrow could be.

Being just a prototype, you really can’t expect much of AMD’s tablet, however the device looks pretty nice. Compal, the company that designed and built it, has put a lot of work into it, and it shows: the tablet looks and feels like it’s ready for a release. The front is covered by the glass digitizer, and the back has a black aluminum cover, which not only looks nice, but also helps cool the processor.

Interestingly, the cooling system also has a fan and a vent – more like an Ultrabook than a tablet. Ivy Bridge powered tablets will have that, too, so that’s not really a deal breaker for AMD. On the back of the tablet, there’s a kickstand – a nice detail that we really should’ve seen on other tablets a long time ago.

The keyboard dock is also well built, although kind of bulky looking with its docking mechanism. The keyboard is your standard run off the mill island style keyboard, so there’s not much to say about it. The big touchpad will definitely be useful for working with the Windows desktop, while the Metro UI interface is better used with the touch screen.

There’s really not much detail about the prototype tablet’s hardware capabilities. All we know about the hardware features is that the device has a 11.6 inch LCD display with a 1366×768 pixels resolution, and that it has a Thunderbolt port, micro USB port and micro SD card slot on one side. The rest of the expansion options (excluding of course, the Wifi and Bluetooth adapters) are located in the keyboard dock: there are three USB ports and an Ethernet jack on the back.

The performance of the new Trinity APU is unknown, but Windows 8 was running pretty smoothly on the demo unit, and with a 17 Watt TDP, you can expect it to be respectably fast – on the same level as an ULV Core i3 or even i5, I’d say, however that remains to be seen in benchmarks.

Windows 8 and its new Metro UI interface play quite well with the Compal/AMD hardware – everything is smooth and fast. The touch experience is quite pleasant – more so than on Windows Phone 7, however there’s a lack of good apps that would let us see the full capabilities of Microsoft’s new OS. The standard x86 software runs great, though, and you can switch between the normal desktop and Metro with the press of a button.

The AMD Compal tablet prototype will most probably never see the light of the assembly line, however that doesn’t mean we won’t see something like it next year – AMD seems set on having their APUs inside tablets, so we should expect that some manufacturer will choose to go along with them – hopefully, they can bring some change to the x86 tablet market, especially in the pricing area.