Smartphones are constantly pushing the limit of screen size and the situation is getting out of hand – literally, you cannot use these 4.5+ inch devices with one hand, at least not comfortably. But the larger screen size has a lot of advantages, especially for a device that’s supposed to replace a computer but still fit in your pocket and be fully functional anywhere, anytime. 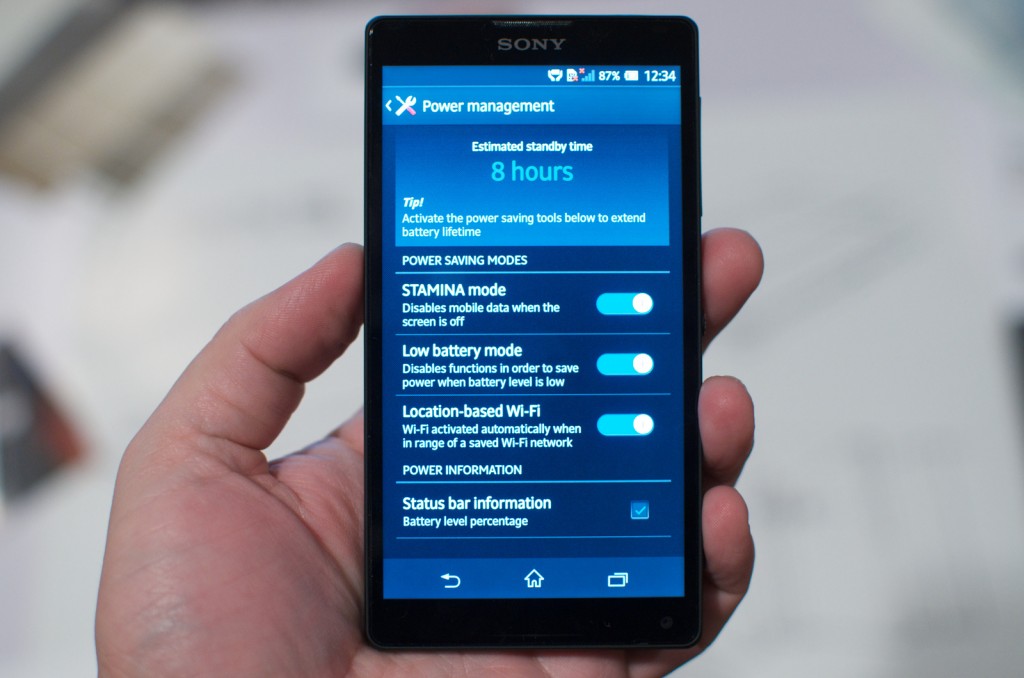 With the Samsung Galaxy S4, we’ve officially entered the 5.0 inch display era on smartphones – now companies really need to figure out how to make them physically smaller, because it’s almost impossible to fit these phones in your hand or in your pocket.

While Samsung’s S4 is pretty small for its display size, it is actually Sony that takes the crown in this area – their Xperia ZL is the most compact device that packs a beautiful 5.0 inch Full HD screen and all the performance you’ll ever need inside.

The Xperia ZL is placed right below the Xperia Z when it comes to the price – and the housing is the only thing that makes the ~$100 possible. The ZL is slightly thicker and lacks the water- and dust- proof qualities of the Z, but it’s still a very well made device in every other way. 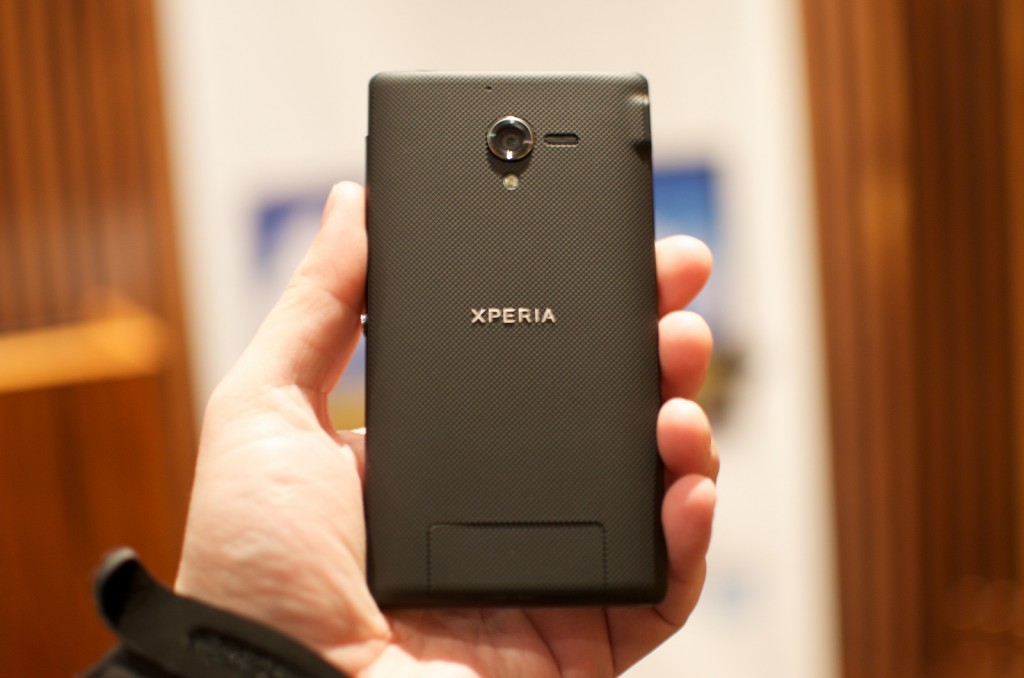 Instead of being able to submerge your phone in water, you’re able to fit it in your pocket and use it with only one hand more comfortably – the ZL is only 131.6 mm long and 69.3 mm wide. That’s 7.4mm/1.7 mm less than the Z, and 5mm/0.7mm less than the Galaxy S4, while the build quality is way ahead of the latter.

In real world usage, that makes a surprisingly large difference, and at this size every mm gained is a big win. And the phone’s 9.8mm thickness turns out to also be an advantage – with its tapered edges, it fits and feels very nice in one hand.

The Xperia ZL fits Sony’s new design lines perfectly – it’s got the clean front look, with a unique LED accent at the bottom, a metallic frame around the device with the round power button at the center of the right side (there’s also a dedicated camera button at the top), and a unique for Sony textured back with a small removable cover at the bottom that hides the SIM and micro SD cards.

Hardware wise, the Xperia ZL is pretty much a copy of the Xperia Z – that is, it excels at every spec. While it doesn’t have the absolute latest hardware or use an octa-core design like the Galaxy S4, it’s the fastest Sony smartphone you can find on the market (along with the Z, of course).

The 5.0 inch display has a Full HD 1920×1080 pixels resolution and uses Sony’s proprietary Mobile BRAVIA 2 technology to provide a crisp, clear picture with natural colors (not overly saturated like the S4 nor toned down like the HTC One). The screen is the same one used in the Xperia Z, which sadly means it has the same drawback – the viewing angles. They’re not even bad – they’re downright pathetic, especially on the vertical, although the colors quickly regain perfection as you move the phone back into the right position. Next to an IPS on a table, the screen makes the phone look really cheap. 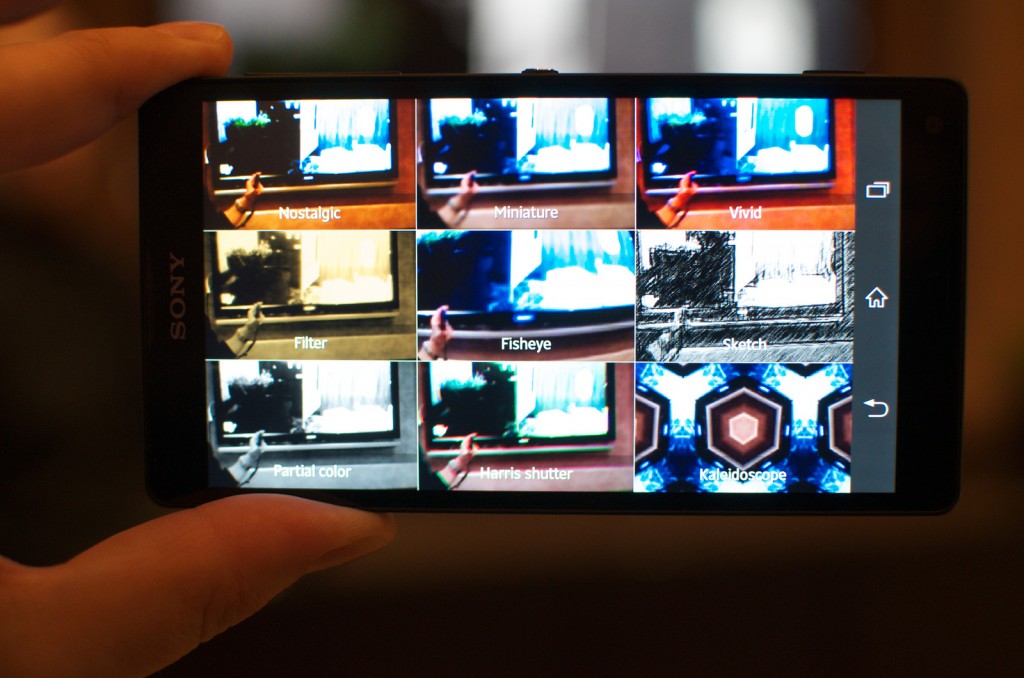 The performance is pretty much on par with the top competitors, with the Xperia ZL using Qualcomm’s Snapdragon S4 (APQ8064) platform, with four processor cores running at 1.5 GHz, 2048 MB of DDR3 RAM and the Adreno 320 graphics adapter. Any apps and games will run perfectly now and in the foreseeable future.

The Xperia ZL has a 13 Megapixels Exmor RS camera with a backlit sensor and support for HDR, which captures great photos and video in most conditions – although it doesn’t come close to the HTC One or Nokia’s PureView, it’s still just as good as the units on the Galaxy S4 and Optimus G Pro. The Superior Auto mode makes it even better for getting the best shot right away, although the software can choose the wrong settings a lot of the time. On the front, there’s a 2.0 Megapixels camera with support for 1080p video recording – enough for snapshots and HD video chat. 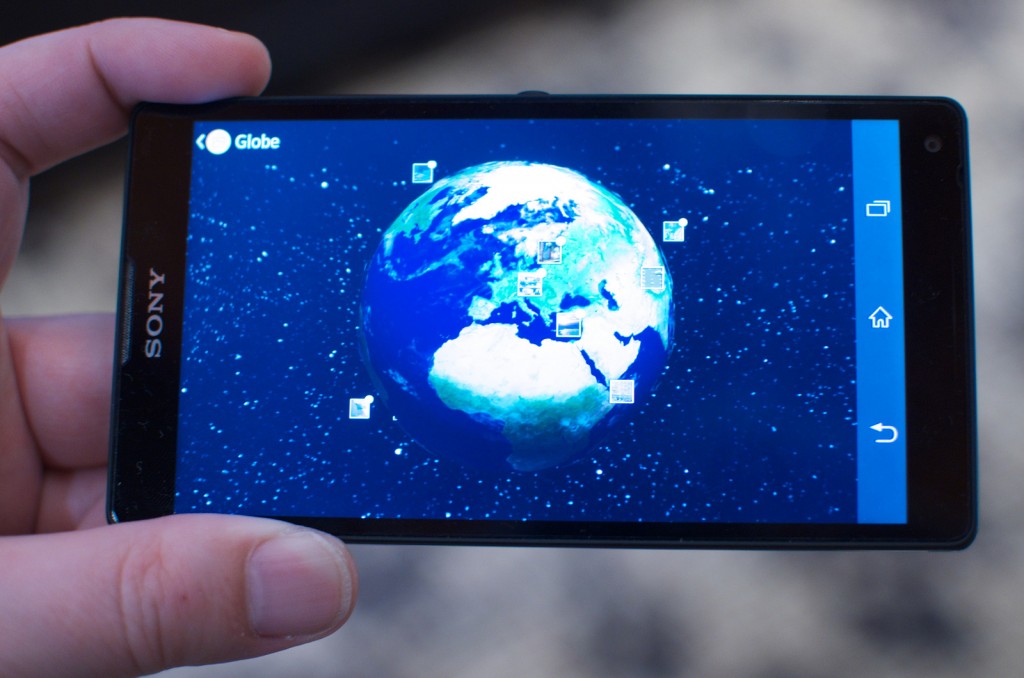 The storage space is provided by 12 GB of user accessible internal memory, which is of course not enough for today’s usage scenarios, so there’s a micro SD card slot to expand it by up to 64 GB. Along with the standard selection of sensors, the Xperia ZL also offers Wifi N, Bluetooth 4.0, GPS/GLONASS, HSPA+/4G LTE, DLNA, NFC and even an infrared transmitter – I guess HTC’s idea was smart enough for Sony, as well.

The Li-Ion battery is a 2370 mAh unit that should last up to 13 hours of continuous use – that’s in line with the competing flagship phones, although with Sony’s software, the number may be lower.

The Xperia ZL ships with Android 4.1.2 Jelly Bean, with a very light customization by Sony. There are several apps that you’ll only find on Xperias (like Walkman, Sony Movies and Sony Select), but mostly, you’ll need to get the desired apps from the Google Play store – that’s a good thing, since it lets you customize the phone to your liking.

The BRAVIA mobile software and the custom camera app are the biggest software differences in the Xperia ZL compared to a vanilla Android installation, and sadly the latter needs an update (which is still not available) to make it work as intended. The infrared sensor has its own app, but you can get better IR software online or on Google Play – and it’s worth it, since you can control any electronics with your phone without any difficult setups or special hardware.

The Xperia ZL has been launched this spring, although it’s still not available in most countries. The standard retail price is around $600-650 for an unlocked unit – a good price for what is basically an Xperia Z with LTE, not to mention the most compact phone with a 5.0 inch display. If you don’t mind the bad viewing angles of the screen, this is one of the best high end phones to get – high build quality, well-known brand, compact design and natural display colors make it worthy of purchasing.

Special thanks to John Biehler