Trending
You are at:Home»Gadget News»Curved Display Samsung Galaxy Round Made Official
By Ollie Green on Oct 9, 2013 · Gadget News 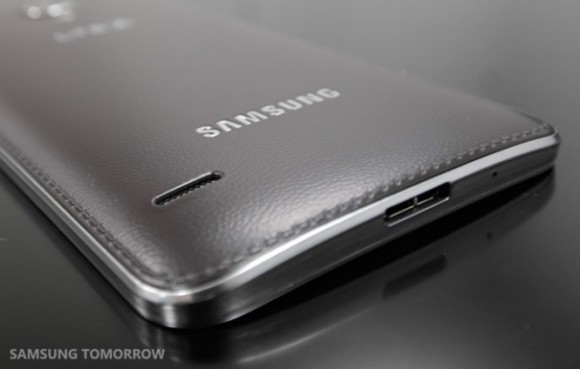 After all of the rumors and bits of information from Samsung themselves, the new flexible display smartphone by Samsung has been released, and unfortunately it isn’t very exciting at all.

The new Samsung Galaxy Round seems to be very similar to the Galaxy Note 3, with a same sized display and a similar build quality with the same faux leather back stitching.

Of course, the one major change from the G Note 3 is that it now has a slightly curved display. The word slightly is a very important word here, and unlike previous prototypes we’ve seen earlier in the year, the Samsung Galaxy Round isn’t very round at all.

Instead, the device has a very shallow concaved display that adds little functionality to the handset at this point in time.

According to Samsung, the Samsung Galaxy Round will have exclusive TouchWiz features, including the ability to open up a new notifications menu when tilting the display upwards when laid out on a flat surface.

I won’t be the first to admit that it’s a little lacking, and I feel sorry for anybody that feels the worth behind the $1,000 price tag. However, it is an advancement in smartphone technology, and I’m happy that Samsung are allowing their customers to experience their progress towards what could possibly be the start of a real flexible display smartphone generation.

The hardware in the Samsung Galaxy Round isn’t bad, and in fact it matches the specifications of the Galaxy Note 3 quite well, so at least we aren’t paying more for less. Spec info is below:
• 5.7” 1080p OLED curved display
• Android 4.3 Jelly Bean
• 13MP camera
• 2,800mAh battery
• 2.3GHz Quad core Exynos processor
• 3GB RAM

It seems that 2013 has been a year of experimentation for Samsung, and I sincerely hope that they aren’t expecting the majority of their customers to buy the new Samsung Galaxy Round or even the Galaxy Gear just yet.

Hopefully though, Samsung are just putting their feet in the water to get a better feeling of the demand for future smart watch and flexible display products.