Trending
You are at:Home»Gadget Reviews»LG maintains the leader image – the Optimus 4X HD is the first quad core smartphone to be released
By Gadgetman on Feb 26, 2012 · Gadget Reviews 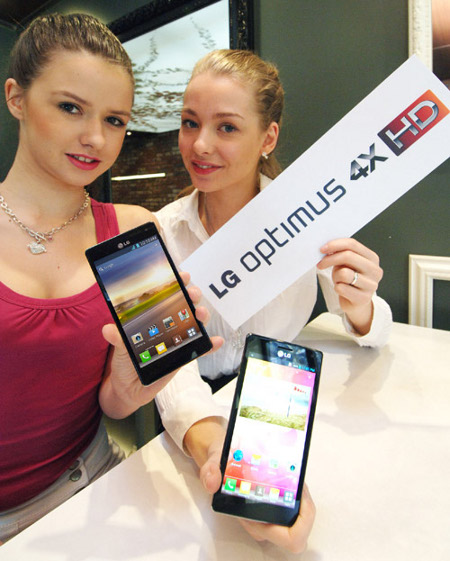 LG looks set on becoming a leader on the smartphones market this year, and they have quite a few new products planned for the upcoming Mobile World Congress already. Obviously, they’re not trying to keep any of them secret, and most of the phones’ specs and screenshots were leaked ahead of schedule. Along with the Optimus 3D and Optimus Vu, one of the most interesting devices is the Optimus 4X HD – the first smartphone to be announced with a quad core processor inside. LG was the first company to release a dual core smartphone, and it seems they’ve made it just in time with quad cores, as well.

On the outside, the LG Optimus 4X HD is not all that different from the other new smartphones on the market – it’s a slab smartphone with a big display on the front and pretty much nothing but the camera on the back. Something that is notably absent is the physical navigation buttons row under the display – it seems that we won’t see them ever again after the new generation of smartphones settles in. Otherwise, there’s nothing interesting about the design of the 4X HD – the main experience is on the inside, after all.

The housing is well built, just like the G2X, with a metal frame all around and Gorilla glass on the front, which should make it sturdy enough to withstand everyday use without problems. The phone is only 8.9 mm thin, which is amazing considering the processing power it packs inside – even the G2X is 1mm thicker!

The Optimus 4X HD is top of the line when it comes to the hardware specs – this phone has everything you can think of and more. The display on the front is a big 4.7 inch wide screen IPS LCD unit with a 1280×720 pixels resolution (hence the “HD” in the name), which has beautiful colors, perfect viewing angles and a high enough brightness to be used in any conditions, even outside in direct sunlight.

The other hardware specs are all standard of a recently released smartphone – Wifi N, Bluetooth, GPS, DLNA, 16 GB of onboard storage space, a lot of sensors and an NFC radio – all are present and accounted for. There’s also an 8 megapixels main camera, along with a 2 megapixels front facing unit.

The most interesting feature, of course, is the new Tegra 3 SoC that’s powering the handset – this thing is twice as fast as any dual core chipset on the market, and it’s amazing to see it in such a small device (well, relatively speaking – the 4X HD is a pretty big phone). The four processor cores in this case run at a whopping 1.5 GHz, and there’s a fifth backup core to help conserve the battery (NVidia’ recently named this technology 4-PLUS-1, and it apparently uses 1 low power core for most tasks, only waking up the main 4 when necessary). The chipset also has a 12 core GeForce graphics adapter that should provide plenty of performance in games, and there’s a full 1024 MB of RAM to complement the powerful SoC (I’d expect more, but it seems that 1 GB is still plenty even for a quad core).

As should be the case with a new smartphone, the Optimus 4X HD will be running Android Ice Cream Sandwich out of the box, and will feature LG’s “improvements” to the interface, as well. They’re not bad, but I think the standard ICS UI is still better. Hopefully, the boot loader will be unlocked just as it was on the G2X/Optimus 2X and developers can get working on creating amazing ROMs for the device.

The LG Optimus 4X HD is already looking to become one of the most popular Android devices this year, and it will be officially announced during the Mobile World Congress in Barcelona. Hopefully, the pricing will be similar to the G2X and the phone will be released soon after it’s announced – we can’t wait to see quad core smartphones on the market, already.