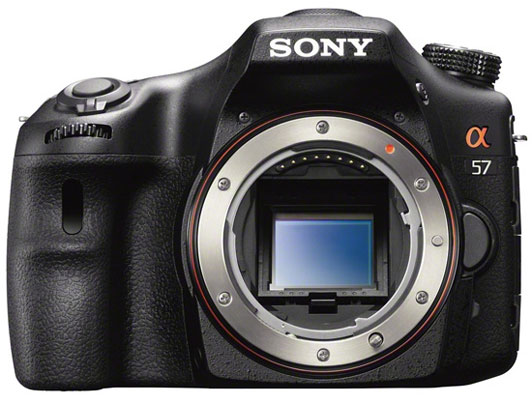 Shortly after announcing DSC-TX20 for the Cyber-shot series, Sony releases Alpha SLT-A57 which belongs to the DSLR line of cameras. It’s a successor to SLT-A55, a well-reviewed model released in 2010. Since it’s an update, Alpha SLT-A57 features several internal and external upgrades.

The new Sony Alpha packs a 16.1-megapixel CMOS camera. Megapixels are slightly lower than its predecessor but the additional CMOS sensor significantly improves photo quality. The CMOS sensor allows it to perform better in low-light conditions. Canon EOS 5D Mark III is equipped with the same sensor but a higher, 22.3-megapixel camera. To further improve photo quality, its image processor was upgraded. The GPS module found in A55 was also replaced by an electronic viewfinder in this new model. It’s smaller but has greater pixel density. A57’s viewfinder allows photographers to switch between two magnification codes. People wearing glasses will especially find it useful, as it offers better views during composition.

An internal feature that didn’t change with A57 is the translucent mirror design. That means you can still take full-time continuous AF during still mode and video shoots. The 12fps firing rate in burst mode is also made possible by this unchanged spec. Externally, the changes aren’t noticeable. My first impression of Alpha SLT-A57 was that it still had the same bulky frame as A55. A closer look shows that it has a larger handgrip and a tilted front dial, making it easier to hold.

Sony also announced HV-LE1 as an optional accessory for Alpha SLT-A57. It’s a video lighting LED panel which you can mount on the camera for continuous lighting. Pricing and availability weren’t announced but we can expect the body to cost around USD$700 and an additional USD$100 if you include the lens.

The low price-point of SLT-A57 places it on the entry level category of DLSRs. It’s a great starter camera before moving up to full-featured professional cameras like EOS 5D Mark III. People learning photography will appreciate the simplicity of this camera’s features.