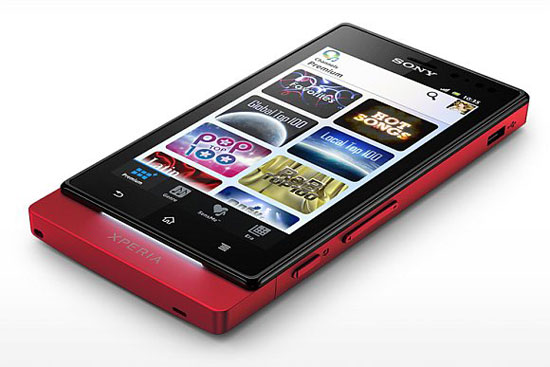 Two months ago, Sony filed to have “Xperia Sola” trademarked by the US Patent and Trademark Office. Clueless as to what it was, we hoped for its appearance during the Mobile World Congress. Unfortunately, it was a no-show throughout the event. Sony only had dual-core, Gingerbread-running phones to show us – Xperia P and U. The moniker is now an official US trademark and steers away from Sony’s typical single-letter naming scheme.

Xperia Sola is hitting the market as a midrange phone. This is Sony’s latest attempt to capture the lower-end Android market after losing $325 million last year. Its form factor resembles the Xperia NXT series with its sharp edges and solid, rectangular frame. The transparent band is missing below its screen and that sets it apart from them. Sola has a 3.7-inch FWVGA display containing 854×480 pixels. Sony says that despite its limited resolution, their Bravia Engine technology offers rich colors and improves contrast for vivid display. Turn the phone over and you’ll see a 5-megapixel camera.

Interestingly, Sola is NFC-enabled just like Xperia S. Built in are two SmartTags so you can change the settings on your phone. Also inside is a powerful 1GHz dual-core processor. Xperia Sola will ship with Android 2.3 Gingerbread but Sony promises an Ice Cream Sandwich update by Q2.

Sony introduces a new propriety feature with this phone called “floating touch” navigation. If you hover a finger over the display, it will act as a cursor. To select, you’ll have to touch the screen. Nonetheless, this new feature is revolutionary and truly innovative.

Xperia Sola may be a midrange phone but many of its specs make it better than most midrange handsets. Its dual-core processor, NFC technology, floating touch navigation, and upcoming ICS update make it an irresistible deal. Even though we’re not sure how useful “floating touch” is, we’re looking forward to its future applications.

Sony Xperia Sola will be available worldwide the middle of the year. People can choose from three colors – black, white, and red.