Trending
You are at:Home»Apple»Why you shouldn’t upgrade to iOS 5.1 – major security glitch found
By Gadgetman on Mar 9, 2012 · Apple 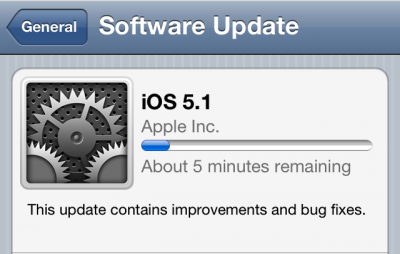 Yesterday, Apple unveiled the new iPad alongside iOS 5.1. The latest iOS update was announced and released on the same day but its availability is still limited. It brings some new features like conversing with Siri in Japanese, face detection, and the ability to delete pictures on your Photo Stream from a device. It addresses a few bugs too and some tweaks on camera interface.

One of the bug fixes addressed by iOS 5.1 is the “disappearing camera shortcut”. In addition to that, Apple changed the button’s interaction. When you slide it up, the lock screen will be pushed upwards and you’ll be taken to the Camera app instantly. From the camera, simply slide down from the top edge and the lock screen will return to its original place.

The new camera shortcut works flawlessly but it poses a major security threat on users. We discovered this bug recently, just one day after iOS 5.1 was announced and released in selected regions. After accessing the Camera app from the code-enabled lock screen, clicking the lower left icon will take you to the Camera Roll. Trouble is, all photos will be on display and not just recently-taken photos like in previous versions. To make things worse, clicking the home button from the image gallery will take you directly to your home screen, bypassing the coded lock screen altogether.

Previous iOS 5 versions were more secure in this aspect and will take you back to the lock screen.

It’s worth noting that when you access the Camera from the lock screen and swipe to the right while viewing the Camera app, only recently-taken photos will show up with iOS 5.1. And if you hit the home button from there, the lock screen will pop right back.

Given this major security threat which grants unsecured access to your device, maybe it’s not such a good idea to upgrade after all. Anyway, the security flaws found in iOS 5.0.1 are hard to pull off and not as bad as the one we found with iOS 5.1.