Trending
You are at:Home»Camera Reviews»Canon one ups their cinema camera prowess with the EOS-1D C and C500 pro cameras
By Gadgetman on Apr 28, 2012 · Camera Reviews 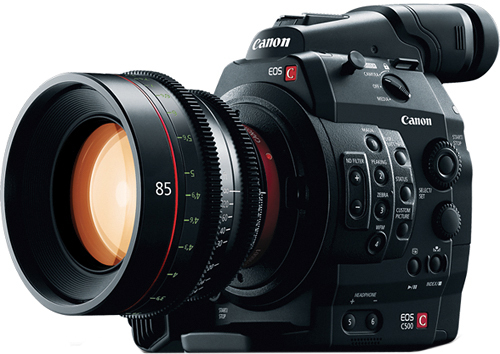 Canon is pretty popular for its digital cameras and camcorders – the EOS 5D Mark II has been a staple in every indie filmmaker’s arsenal, even though it’s mostly a professional dSLR, and the company’s new line of professional cameras are bustling with features that can rival any other cameras on the market.

This year, Canon once again impresses everyone with the launch of the Cinema EOS-1D C and Cinema EOS C500 professional cameras that are intended for serious filmmakers, videographers and studios. Their price tags reflect that – these cameras are very expensive, with the C500 costing more than the famous RED Scarlet, which offers almost the same feature set. While I don’t doubt that it’s worth the money, the EOS-1D C will probably end up being the choice of indie film makers.

So who are the cameras made for and what features do they bring in tow?

The cameras are still being developed, and it’s expected that the EOS-1D C will hit the market first at the end of 2012. There’s not that much known about their features, but what we know has definitely left us impressed.

Let’s start with the cheaper (or more precisely, less expensive) EOS-1D C – this camera is basically the a special version of the new flagship dSLR EOS-1D X, aimed towards filming rather than still shots. It’s plenty good at both tasks, though, with the external controls being pretty much identical to the 1D X, but the features are geared towards recording things at more than 24 frames per second in a high resolution.

The camera supports a slew of 4K shooting modes, including 8-bit 4:2:2 filming at 24 FPS, with the video stream going to one of the two high speed CF card or an external recorder over HDMI or Ethernet (there’s also an integrated headphones jack for audio monitoring or recording, for your convenience).

The Cinema EOS C500 is basically Canon’s flagship professional camera, with a unique modular design and a ton of features that will make it one of the first choices for any movie studio. The C500 also supports 4K video recording, has a complex cooling system to take the heat away from the main hardware on long filming days (and yes, it can film for days at end if need be), has dual CF card slots and dual 3G-SDI ports for outputting compressed or uncompressed video in any resolution and an industry standard PL mount for all the accessories that you might want to use or carry over from previous pro cameras. The ISO range is 320-20,000, and you can shoot 4K video in 10-bit 4:4:4 at 60 FPS – more than enough to shoot even the most expensive blockbuster.

The cameras will only appeal to seasoned filmmakers, especially when their price can buy you half a dozen dSLR bodies. The Cinema EOS-1D C will retail for $15,000 – quite a step up from the $6,800 EOS-1D X, while the EOS-C500 will set your department back $30,000 – not to mention the price you’ll pay for all the accessories. But hey, quality is worth the money, especially when these cameras will be good for work for at least the next decade.