Trending
You are at:Home»Gadget Reviews»Hyundai A7 – the cheap $110 tablet with Android 4.0 Ice Cream Sandwich and 1080p video playback
By Gadgetman on Apr 2, 2012 · Gadget Reviews 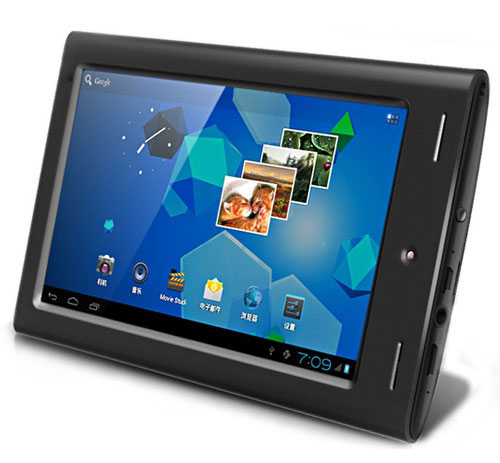 We thought $199 was the cheapest 7-inch tablet Android manufacturers could squeeze out. I’m implying the rumored Google Nexus tablet, of course. As it turns out, we could also get a 7-inch tablet with a decent build for $110. The cheap tablet is called Hyundai A7 and surprisingly, isn’t in related to the car maker.

Hyundai A7 has linear edges so you need to be careful when handling it – the sharp corners might hurt and holding it for long periods won’t prove otherwise. When used in portrait mode, you can see three physical buttons below the screen. There’s not really much to say about its design. Hyundai A7 stands out against competitors but only because it looks like a cheap rendition of Acer Iconia Tab.

Hyundai A7 has a 7-inch capacitive touch display. Inside it is a 1.5GHz Quanzhi A10 Cortex-A8 processor, 512MB DDR3 RAM, and 8GB internal memory. For a cheap-looking tablet, we have to say we were impressed by its mini HDMI output. It can stream full HD 1080p videos to compatible HDMI devices. On top of it all, Hyundai A7 will run Android 4.0 in its pure Ice Cream Sandwich goodness. Other specs include:

Beyond its ordinary design, Hyundai A7 has great specs. While it lacks front- and rear-facing cameras, all other specs make it good enough for everyday use. It’s a great buy for $110 but if you want to ensure quality without hurting your budget, we suggest you wait for the 7-inch tablet that Asus is rumored to be making for Google to be the first Nexus tablet.