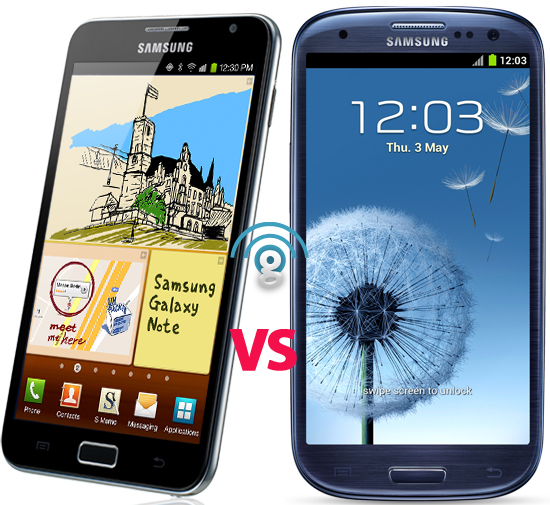 The Galaxy S3 is now set for release, and it’s been very positively received by most people, except maybe the most hardcore developers who don’t care about style and say that Samsung has “sold-out” with the new design :-).

Seeing the Galaxy S3 in person, you generally think of two other smartphones from the same company: the Galaxy Nexus when looking at the phone and the Galaxy Note when using it. Indeed, the big display puts it very close to the smartphone/tablet hybrid, and it’s interesting to compare them in more detail.

The design of the Galaxy S3 and Galaxy Note is pretty similar, although the S3 looks more like the Nexus than the Note. The Galaxy Note is basically an oversized Galaxy S2 in terms of design. Both smartphones feel similar, but of course, the Galaxy S3 is easier to hold with one hand, being a full 12 mm less wide. Surprisingly, the display is a well sized 4.8 inch unit – it barely fits inside the housing, with the bezel being very slim. Both the Galaxy Note and Galaxy S3 have a Gorilla glass covering the display, but the S3 has a glaze finish on the back cover (which is also removable) that makes it more scratch resistant.

The Galaxy Note and Galaxy S3 are very similar when it comes to the internal hardware – the only real difference is in the processor and graphics adapter – while the Galaxy Note makes due with the older Exynos 4 Dual, the new Galaxy S3 uses the Exynos 4 Quad. Both chips are clocked at 1.4 GHz, so technically, the S3 should be twice as fast (at least when Android makes use of all available). The situation is similar when it comes to the graphics adapter – both phones have a Mali-400MP adapter, but the S3 uses a newer version with more cores. The other hardware features are practically identical, with the glaring exception of the integrated stylus on the Galaxy Note (called the S Pen), which can be really useful sometimes.

Since both smartphones are made by Samsung, they have almost the same feature set when it comes to the software, as well. The difference, at least for now, is that the Galaxy S3 has some unique features that will not be available for the Galaxy Note – Touch Wiz 5.0, Smart Stay, Direct Call and Smart Alert being some of them. In turn, the stylus-equipped Galaxy Note has several apps and features to make it work better with the S Pen – the Galaxy S3 will have to be operated the “old way” – with your fingers.

Both the Galaxy Note and S3 are similarly priced at the moment, which makes the choice harder. If you need to be able to take a lot of notes and sketches, the Galaxy Note with its stylus and bigger display is the better choice, but you’ll have to find a large pocket or carry it in a separate bag. The S3 fits quite well in most pockets, but you’ll have to make do with only an on-screen keyboard for notes – it’s up to you to decide.