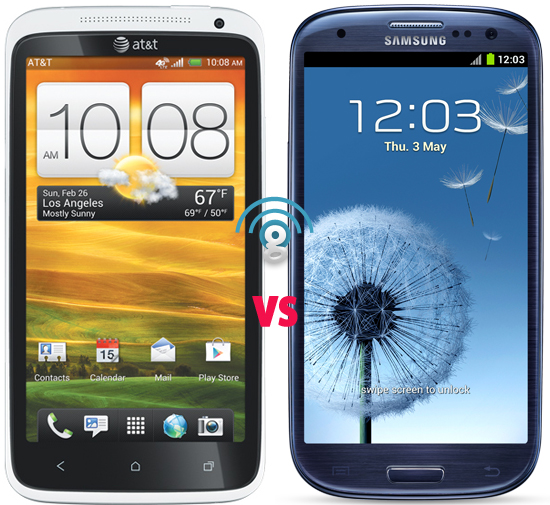 HTC hasn’t been doing well on the smartphones market for the past year, but things changed in 2012 with the announcement of the One line of smartphones. The first three models are all great for their intended niches – the One V is pretty much the best budget phone out there, the One S combines style, sturdiness, nice hardware and a good price into one package, and the One X is the flagship, coming with a quad core processor, big HD display, NFC and other extras. But just when we thought HTC will be the leader of the high end market once again, Samsung came out with the Galaxy S3 – a phone that overshadows the One X in design, features, power and advertising.

The design of the Galaxy S3 is surprisingly similar to the One X – seeing as both companies kept the phones pretty secret, I believe they just arrived to the same conclusion by themselves. The rounded lines of the One X certainly make it easy to hold with one hand (well as easy as it is for a 4.7 inch device), but the Galaxy S3 looks just slightly better, with a more aesthetically pleasing design – maybe they did spy on HTC and perfected the design, I don’t know. Both phones feel about the same when it comes to build quality – a fact they owe to the plastic construction.

The hardware features of both the HTC One X and Samsung Galaxy S3 are very similar, which is not surprising seeing that they’re both from the same generation of phones. The performance of the quad core processors should be similar, and the same applies to the graphics adapter. Both phones have NFC and Bluetooth 4.0 with aptX, but the HTC One X lacks the removable battery and a micro SD card slot, both of which are present on the Galaxy S3. Moreover, the standard battery of the Samsung is bigger and lasts longer.

The displays of both phones are pretty similar, but the Galaxy S3 does have better colors (thanks to the AMOLED panel being well calibrated, unlike the Galaxy S2) and better daylight visibility, not to mention that it uses less power because of the PenTile matrix.

Here’s where the Galaxy S3 dominates – Samsung really packed the phone full of cool and useful software. In addition to the standard Android 4.0 stuff, you get a new Touch Wiz UI that looks really nice, Samsung Hubs apps, Live panels, AllShare, Smart Stay and Smart Alert, Social Tag, S Beam and of course, the much-talked about S Voice (which is basically Samsung’s version of Siri – I guess it won’t be long before the lawsuits start coming in).

HTC sort of under-equipped the One X – sure, Ice Cream Sandwich is great on its own, but a few extra apps can provide the final push for a potential buyer, and Samsung’s got that right. Thankfully, neither HTC nor Samsung locked down the boot loader, so power users, modders and developers can live another couple of years with custom software on their ever-fresh mobile powerhouses.

Both the Galaxy S3 and the One X will hit the market at the same time, and compete directly with each other. Which one you choose depends on you, really, but the Galaxy S3 is the better choice for the average user, as well as the style conscious developer – unless you really need the Tegra 3, Samsung offers more features for the buck than HTC in this case.