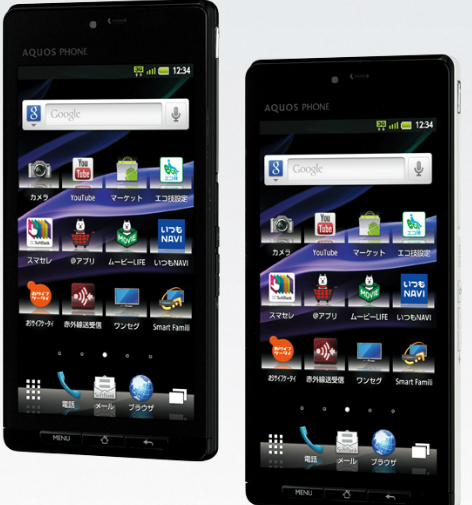 Sharp Aquos 102SH was an impressive smartphone not just in design but in hardware. It matches and surpasses some specs of its biggest competitors but some of them makes it cower behind the shadows of other high-end phones. Initially offered in Japan only, the phone is now available for the international market as Sharp Aquos 104SH. Basically, the new variant is more Western-friendly and has internal changes which make it more suitable for the US market.

I guess we can say that Sharp Aquos 104SH has a similar form factor to Samsung Galaxy S2 minus the uneven back surface, physical home button, and curved corners. For navigation it has three capacitive buttons beneath the 4.5” display and minimal bezel on other sides. The minimalistic design of 104SH doesn’t come off as bland mainly because of its color options. Overall, the handset looks sleek and is highly appealing.

Power and volume controls feel fragile but are easily reached when holding the phone with one hand. Above the volume controls is a space for attaching charm straps. The notification LED below the capacitive buttons are really useful and helps you figure out what type of notification you receive before waking up the phone. It’s not the thinnest at 8.9mm but it is light for its size, weighing only 126 grams. And did I mention that it has a water-resistant shell? That alone makes it slightly better than many of its high-end competitors. Well, except for Panasonic Eluga that is with its resilient frame.

The 4.5” screen of Sharp Aquos 104SH has an impressive screen resolution of 1280 x 720 and pixel 326ppi pixel density. The freshly launched Samsung Galaxy S3 only has a 306ppi. You can choose between different display modes with Vivid mode as the best. And while the Vivid mode looks good, it drains battery faster and still not quite Retina Display or the high-contrast AMOLED. An interesting feature of its display is VeilView technology which prevents prying eyes from seeing what’s on it. People can only see geometric patterns when viewing your phone from the sides. This feature is especially useful for those who like to tinker with their phones in public places like the subway. VeilView can easily be enabled from the notification bar and while it makes the display less vivid, the privacy feature is certainly much appreciated.

Powering Aquos 104SH is a 1.5GHz dual-core TI OMAP 4460. And while most of you crave for quad-core chips, I share the sentiment of Sony who questions the need for them. Qualcomm’s Snapdragon S4 is proof that quad-core isn’t always better than two cores. Besides, dual-core is not so bad on 104SH especially that it’s clocked at 1500MHz. The phone runs Android 4.0 Ice Cream Sandwich though which is relieving to know.

The 12MP camera shakes grounds but without a LED flash, calling it disappointing is an understatement. You have to be in a well-lighted environment to make the most out of it. Photography enthusiasts will be happy to know it takes great shots on macro. The placement of the 1.3MP front shooter is less than pleasing too as it is placed between the home and menu button. It’s almost impossible to take self-shots using the front shooter without obstructing the lens. Other specs include 1GB RAM, 16GB internal storage, and NFC technology for wireless payments. Included in the package will be a 2GB microSD card.

Sharp Aquos 104SH may not be a direct competitor to the flagship phones of HTC, Samsung, and LG but it has several advantages over them. If you value privacy most and usually take photos in well-lit places, it is a good phone to have. Most of its hardware are future-ready too so it should survive a year or two without needing an upgrade.