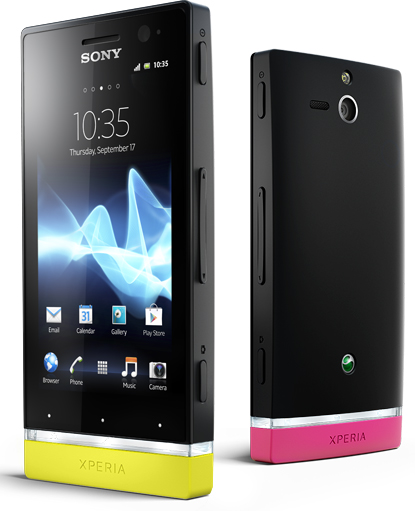 Sony got rid of the Ericsson part of their name, and it seems like they’re doing better than ever on the smartphones market since. For their new Xperia phones, they’ve gone with a new design, which is actually quite nice and refreshing, while still having that trademark Sony look and feel.

After releasing the high end Xperia Ion and Xperia S, the company decided to turn their attention to the other niches, announcing the midrange Xperia P and just recently, the Xperia U – a budget smartphone that has enough features to offer to make it worthy of attention.

The Xperia U has the same unmistakable design as Sony’s other 2012 smartphones – the company calls it the “NXT design line”. As I’ve mentioned in the reviews for the Xperia P and Ion, it’s quite easy on the eyes, while being practical, as well. The U is mostly made out of plastic materials, but that doesn’t stop it from feeling AND being durable enough to withstand any kind of use. The bottom piece comes in several colors, and you can change it depending on your preference or mood.

Right below the capacitive navigation buttons is an LED strip, which lights up in different colors for different notifications, making the phone livelier. It’s a nice addition that will attract the young crowd, as well as those who want a way to get silent notifications without having the display turn on an use the battery.

Aside from looking nice and having a pretty low price point, the Xperia U also has a very decent set of hardware on the inside. The display is a relatively small 3.5 inch unit with a 854×480 pixels, which is more than enough for any tasks, and with a dual core processor under the hood, there shouldn’t be any problems running even the most intensive apps. The 512 MB of RAM is a bit limiting given how large today’s app tend to be, but you’re safe unless you run over a dozen of them at the same time. The biggest drawback is the 4 GB of internal storage space – that’s all you get, and it’s definitely not a lot. There’s no micro SD card slot, so you’re stuck with having to always download all your files to your computer when you run out of space (and you will pretty quickly).

The Xperia U includes a fairly standard set of software – it runs Android 2.3 Gingerbread out of the box, and can be upgraded to version 4.0 over the air, which you should do since it’s much better and faster (thanks to full multi-core support). The Timescape UI is pretty sleek, but nothing special, aside from the tight integration with Twitter and Facebook. Sony also included a few of their own software tweaks and apps, like the TrackID and xLOUD features for audio, the Sony Entertainment Network and the full set of Google apps.

The Sony Xperia U is already available on sale for around $300 unlocked and without a contract (you can even find it for $250 in some stores), which is a pretty good price for what you get. The price with a contract is of course, much lower or even non-existent. The phone is worth considering if you need an affordable, compact smartphone that looks great, is well-built and has enough power to run all the apps you need.