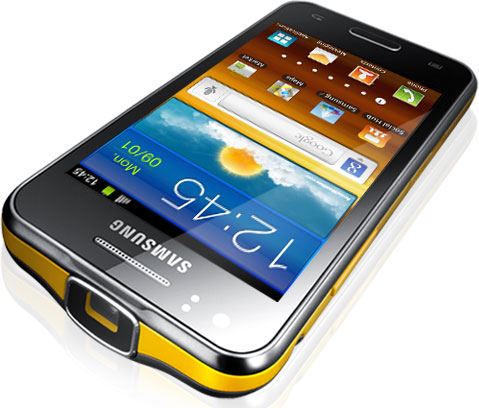 Samsung has got quite a few smartphones on the market at the moment, and even with the whole Apple debacle, they still plan on continuing to work on new products. Among the many various models in the Galaxy line, one of the most unique devices to be released this year is the Galaxy Beam – a nice smartphone that would not stand out much, except that it features an integrated projector.

The design of the Galaxy Beam is pretty standard for a Samsung phone – it’s got the familiar lines and finish of the Galaxy S2, with the only major difference being in the added thickness, the colored frame around the sides and of course, the integrated projector at the top. The front is taken up by the display and the navigation buttons (the usual deal – one hardware home button and two touch buttons for back and menu), while the back only has the camera and LED flash. On the right side there’s a dedicated on/off button for the projector, the power button, as well as a micro SD card slot, while the left side houses the 3.5 mm audio jack, volume adjustment button and the SIM card slot.

The hardware features of the Galaxy Beam aren’t exactly top of the line, but it’s not the most mediocre smartphone, either. There’s a dual core NovaThor U8500 processor under the hood, with 768 MB of RAM and 8 GB of built in storage space, so you’ve got more than enough basic specs to run any apps. Games should run without a hitch, too, thanks to the Mali 400 GPU. The camera on the back can shoot 5 MP photos and 1080p video, while the front facing 1.3 MP unit can take some pretty good snapshots and regular VGA video (useful for chat). The other specs (see the table below) are everything you’d expect from a modern smartphone, except of course for the projector – that requires a separate mention.

The projector is a pretty decent DLP that uses LEDs as a backlight, and it can provide up to 15 lumens to a 50 inch image. The resolution is just 640×360 pixels, but it’s enough for most uses – you won’t be watching HD video on this thing, of course. Overall, it’s a nice tool for anyone who needs to present stuff to other people or wants to play games, watch video or browse the Web on a bigger screen without any additional hardware (you’d need to leave the phone in the dock or on the table for that, though). Of course, you can use the projector as a powerful flashlight, too – there’s even a special option for that in the dedicated projector app!

While the hardware is plenty good, the software is a bit disappointing – Samsung could’ve done better, but they chose to go with Android 2.3.6 Gingerbread (it’s not even the latest version – come on!) with the old Touch Wiz UI. I’m sure they will have an update ready before you know it, but it sure would’ve been nice if the phone shipped with Ice Cream Sandwich out of the factory.

The Samsung Galaxy Beam is available on sale in Europe and the US, and it goes for around $600 unlocked or $150 on a contract. This is a pretty good price for such a smartphone, although it’s definitely a niche device – not many people want a pico projector in their pocket.