Sony is pretty much the only manufacturer of consumer electronics that has consistently been known for making high quality, premium devices aimed at those who value design over specs (although the latter was always on a high level, as well). That holds especially true for mobile devices, with Sony’s smartphones and tablets being considered premium devices aimed at those who don’t care what runs underneath the stylish exterior. Sony’s Xperia phones have always been comparable only to the iPhone and the few Android flagships.

But things have been getting harder for Sony’s mobile division as of late – there are a lot of competitors, who are always pushing the limit on both quality and price, and nowadays, it’s really hard to choose a Sony smartphone when you can get the same build quality, software and much better hardware for the same price.

This prompted Sony to consider entering the mainstream and budget niches, and one of the most interesting devices in the category is the new Sony Xperia C – a phone that fuses the traditional Sony style with a price that most people can afford.

The Xperia C is unmistakably Sony – it’s got the same overall style as the company’s more expensive handsets (like the Xperia Z), complete with the unique round power button on the right side. The build quality is also at a high level, although you won’t find any metal or Gorilla glass back covers here – it’s all quality plastic covered in a nice coat of paint.

You may notice right away the lack of separate navigation buttons – Sony has done away with them in favor of the Android 4.x virtual buttons, and has used the empty space for an LED notification bar, like the one used on the Xperia Z. The top and bottom parts also have a very symmetrical design, which makes it easier to use the phone in any position.

On the back, there’s a plastic cover, as well as the camera with LED flash at the top and main speaker at the bottom. The Xperia C comes in three colors: white, violet and black, with the latter being the most attractive in my opinion (although the violet looks really nice, too).

The hardware of the Xperia C is rather impressive for a budget smartphone, although it’s not as good when you compare it to the competition – you still pay more for the Sony brand name, in the end.

The display is a 5.0 inch TFT LCD unit with a 960×540 pixels resolution, which is just enough to not show much pixilation, but the screen size only aggravates the bad viewing angles – and there’s no Triluminos or BRAVIA technology to save the day, either. It’s a pretty mediocre display compared to other phones, but I’m surprised Sony has even used such a large screen on a budget model.

A very interesting choice is the processor – Sony chose the top budget chip maker, MediaTek, to provide the muscle behind all the apps. MediaTek has traditionally been associated with low end phones and their first generation ARM chips have been pretty hot and power hungry – but things have changed drastically with the latest dual and quad core chips. 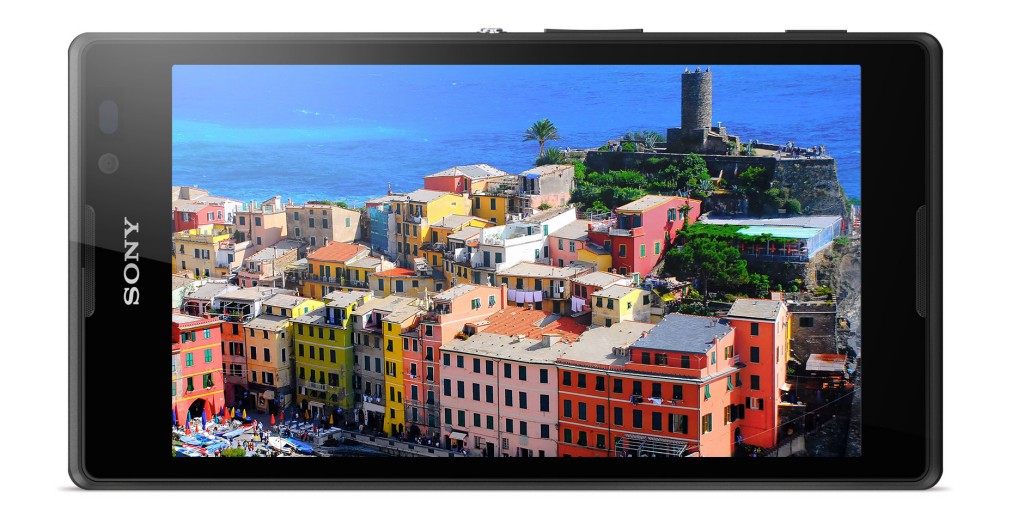 The MT6589 used in the Xperia C provides enough performance to run any apps and games with ease, while not eating through the battery in a couple of hours. The chip has four cores running at 1.2 GHz, 1024 MB of DDR3 RAM and the PowerVR SGX544 graphics adapter. The MT6589 is as fast as Qualcomm’s latest chips clock-for-clock, and in everyday use, there will be no visible difference.

Sony also equipped the Xperia C with 4 GB of onboard storage space, a micro SD card slot (which supports 32 GB SDXC cards, nothing larger sadly), an 8 Megapixels main camera with an Exmor R BSI sensor, a front facing 1.2 Megapixels shooter, and a pretty large 2390 mAh battery that should last up to 12 hours.

Connectivity wise, the phone has two SIM card slots (a staple of every MediaTek smartphone), Wifi N, Bluetooth 4.0, the usual microUSB port, GPS (no GLONASS, though) and the not-so-usual support for Category 8 HSUPA, which uses carrier aggregation (i.e. both SIM cards) to provide up to 11.5 Mbit/s upload speeds – not bad for 3G, but you also need two carriers who work together on this one. Download speeds are capped at 42 Mbit/s – the standard maximum for current 3G networks.

The Sony Xperia C comes with Android 4.2.2 and Sony’s custom UI, apps and customizations, which aren’t all that extensive, but do make the experience slightly different than a traditional Android installation. Overall, the software is pretty stable and works very smooth and fast, which is more thanks to Android and its developers than Sony (who has traditionally been very bad with providing updates).

The Sony Xperia C is launched in China and priced at $300. In India and a few other countries at the end of September, with the exact price still being unknown. It will cost around $300 or even less, which is low for a Sony, and if you always wanted an Xperia phone but don’t want to shell out for a Z, the Xperia C is a good budget choice. However, if you don’t care for the brand, there are other phones with better hardware (albeit less style).