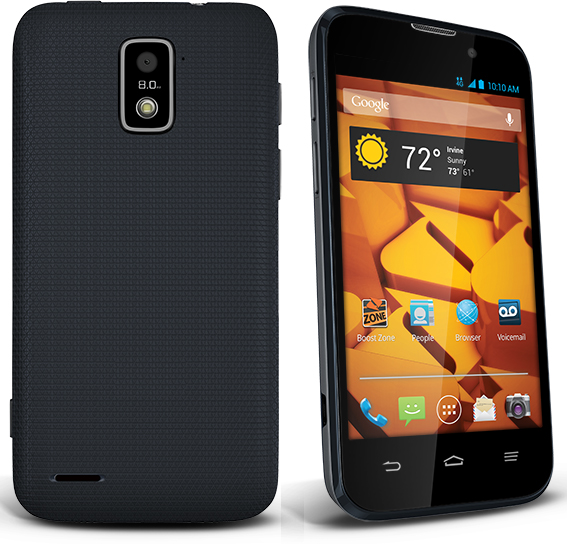 ZTE are renowned for their low priced, low value handsets all over the world, and despite not having anywhere near high end hardware or software when compared to flagship handsets from companies like HTC and Samsung, for the price, there usually isn’t much else better out there than a ZTE handset.
The new ZTE Warp 4G has now been confirmed as an available handset for purchase from Boost Mobile in the United States, and includes a rather generous $199.99 price tag.

Boost Mobile is Sprint’s super-fast LTE 4G capable network, and the ZTE Warp has been specifically designed for high speed browsing on a relatively cheap handset. Along with its LTE 4G capabilities, the ZTE Warp 4G has a 1.2GHz dual core processor, an 8 megapixel rear camera and a front facing 1 megapixel camera, a rather small 8GB storage, 1GB RAM, and a 2070mAh battery.

The device will also be running Android 4.1 Jellybean, with almost a non-existent overlay over the top, perfect for buttery smooth performance which is just what a less capable device such as the ZTE Warp needs.

When compared to other low-to-mid end handsets, the ZTE Warp lands itself a pretty comfortable spot between handsets from Huawei and handsets from the likes of HTC and Samsung.

You may not be getting a premium phone that feels as comfortable in the hand as say the Samsung Galaxy S4 Mini or the HTC One Mini, and you’re lacking the extra software features that both of these offer, but instead you’re given a barebones experience that allows you to browse quickly with superfast 4G at a relatively low price- something which is a rare commodity in the lower end smartphone market.