Trending
You are at:Home»Camera Reviews»Lumix G X-Vario – Specs and features overview
By Gadgetman on May 22, 2012 · Camera Reviews 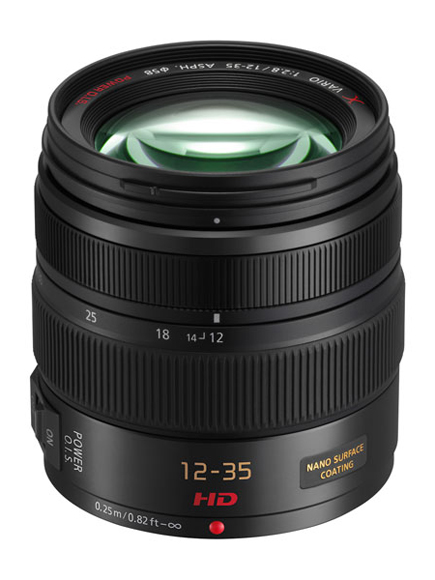 Last time we heard from Panasonic was when they launched Lumix DMC-GF5, a mirrorless ILC that succeeds DMC-GF5. Today they don’t come out with a full-featured camera but with an accessory, Lumix G Vario 12-35mm F/2.8 ASPH. It is a digital interchangeable standard zoom lens compatible with the Panasonic Lumix G Series, also known as Micro Four Thirds. The F2.8 aperture lens has a 12-35mm zoom range which is equivalent to 24-70mm in a 35mm camera. Professional and amateur photographers alike can take advantage of the new lens as it is able to capture a wide variety of scenes.

Panasonic Lumix G-X Vario 12-35mm/F2.8 ASPH/Power OIS doesn’t have powerzoom like its predecessors. Instead it has a conventional rotary zoom ring making it suitable for still photography. It steers away from plastic construction of previous models by sporting a metal barrelled frame and environmental sealing. It has a more compact design than the typical 18-55mm F3.5-5.6 lens kits for APS-C SLRs, measuring only 3 inches or 75mm in diameter and length. It’s also significantly lighter at less than 300g.

Still photography isn’t the only niche this new lens caters to. The Power OIS stabilization system means it is designed for shooting movies as well. With the addition of a near-silent autofocus it is even more suited for movie shooting.

Compatibility of Lumix G X-Vario 12-35mm F2.8 isn’t limited to Panasonic Lumix G3 and other cameras from the G Series. As a Micro Four Thirds lens it will also work on Olympus counterparts like OM-D E-M5. Users of Panasonic DMC-GH2 and GX1 can also use this lens on their higher-end models.