Trending
You are at:Home»Tablet Reviews»Motorola Xoom 2 Xyboard vs Samsung Galaxy Tab 2 10.1 – which is better for all-around use?
By Gadgetman on May 17, 2012 · Tablet Reviews 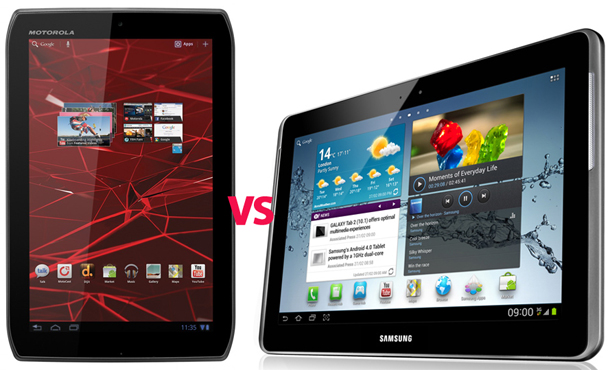 Motorola and Samsung each had 10.1-inch slates of their own. Both shipped with Honeycomb, a version of Android that limited their access to Honeycomb-optimised apps. Both tablets – except for some variants of Motorola Xoom – also lacked microSD slots for expandable storage. Samsung Galaxy Tab 10.1 did surpass the original Motorola Xoom in sales mainly because it was sleeker and lighter. Both manufacturers give their tablets a second shot to compete against each other once again.

Motorola made significant changes on the design of Xoom 2. Its once-rounded corners are now blunt, giving the tablet a somewhat octagonal shape. The rubber material used on the top end of the back cover now extends an all four sides towards the edges, making it splash proof. The central portion of the back has the same chrome finish as Xoom 2 Media Edition but skips the visible screws for a more polished look. In a nutshell, Motorola Xoom 2 is a tablet that dares to combine rugged and classy.

Samsung also made some notable changes on Galaxy Tab 2 10.1. Take for instance the new chrome accents surrounding the edges before they meet at the back. These chrome accents are wider on the short sides of the front panel, reducing the black bezel on these ends and making the slate easier to grip. The back cover is still smudge-proof and smooth like the original but feels a little cheap since it’s made of plastic.

Speaking of dimensions, both slates were revamped either for the better or worse. Motorola Xoom 2 is taller and wider than its predecessor but it’s also thinner. Samsung Galaxy Tab 2 10.1 has virtually the same length and width as the original but gains thickness in the process.

In the end, Motorola Xoom 2 comes out as the sleeker tablet while Samsung Galaxy Tab 2 10.1” manages to impress too us by weighing 11 grams lighter than its competitor.

WINNER: Motorola Xoom 2. The rubberised material around its edges protects it from bumps and scratches, eliminating the need for a separate case. This design also keeps it safe from moisture in case you accidentally place it on a wet surface or spill something on it. It may have a rugged design compared to Samsung Galaxy Tab 2 10.1 but it still has that premium feel expected from a tablet of its size.

Better cameras, a display with wide viewing angles, and a faster processor – these are three things that make Motorola Xoom 2 rise against its competition. Samsung Galaxy Tab 2 10.1” could only boast a faster Bluetoooth interface. The display resolutions of both slates are average. Colors are vivid but not as intense as the AMOLED display of Samsung Galaxy Tab 7.7. Both have the exact same dual-core processors and graphics but Xoom 2 is clocked at faster speeds – 1.2GHz to be exact. While Motorola Xoom 2 ships with Honeycomb out of the box, you can upgrade it to ICS. It’s also worth noting that extra storage is no longer a problem now that both tablets have microSD slots. 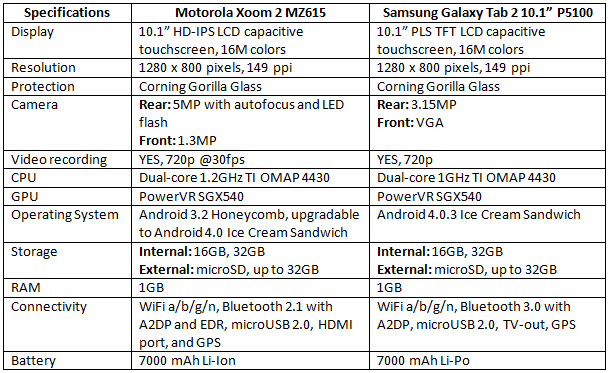 WINNER: Motorola Xoom 2. For the most part, it has better specs than Galaxy Tab 2 10.1. That makes it better for all-around use. Whether you intend to use the tablet for gaming, browsing the web, playing music, watching movies, or taking better-quality photos and videos, it’s ready to serve you. The thought of Honeycomb shouldn’t make you cringe either since Motorola promised an ICS update.

Motorola (Xyboard) Xoom 2 may be a late 2011 release but it’s hard to ignore all the great changes made on its design and hardware – at least, when compared to its predecessor. We weren’t really impressed with Galaxy Tab 2 10.1” as an upgrade to begin with and that’s why we recommend it over Samsung’s 10-inch slate.