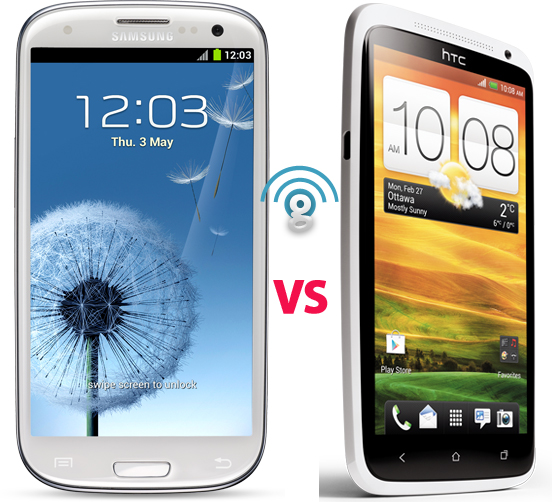 HTC One X and Samsung Galaxy S3 are in the big leagues with their colossal screens and equally large dimensions. Beyond looks, both smartphones are quad-core behemoths and pack the best hardware. As flagship phones of both HTC and Samsung, it is only fitting to see these two on a stand-off. They are after all the biggest rivals to each other.

HTC goes ceramic this time around, using micro-arc oxidation on HTC One X to create a case that’s thin and lightweight but sturdy. The phone still feels solid like any HTC phone but without the bulk and hefty weight that previous models were guilty of. Also worth mentioning is the soft-touch feeling of the ceramic-treated chassis. Samsung still opted for plastic with the Galaxy S3 but with good reason – the material absorbs shock better. We are yet to find out how it’ll performs in a drop test but given how its predecessor performed, we have high hopes for it. HTC One X already had its drop test and almost passed if it were not for the face-down challenge on hard concrete.

The form factor of HTC One X isn’t any different from previous releases. It has the same rounded corners and a mildly curved back for improved grip and a slimmer profile. Not that it’s needed since it measures only 8.9mm thick. Samsung Galaxy S3 follows the same design pattern except it has this glossy metallic rim surrounding the edges. It’s also thinner than SGS3, measuring only 8.6mm in thickness. Surprisingly, HTC One X is lighter and weighs only 130g compared to 133g of Galaxy S3.

A major difference between the two is their navigational buttons. HTC One X has three touch-sensitive controls below the display and Samsung sticks to the physical menu button with two touch light buttons – one on each side.

WINNER: HTC One X. The cheap impression of Samsung Galaxy S3 is hard to shake off. Its glossy back cover only makes things worse. Between the two, HTC One X is the more good looking anyway, not to mention it weighs less and feels more solid.

HTC One X and Samsung Galaxy S3 have Android 4.0 Ice Cream Sandwich pre-installed with customary skin. HTC One X has Sense 4.0 UI while Galaxy S3 has Touchwiz 4.0 as its user interface. Aesthetically, Sense is more pleasing to the eye but functionality-wise, Galaxy S3 wins us over. We’ve highlighted the features of SGS3 in a separate post and they’re truly remarkable. The option to make calls while texting simply by lifting the phone to your ear is intuitive and smart. While this is true, we can’t deny that HTC One X also has noteworthy features including Beats Audio and the ability to take a photo while recording a video.

WINNER: Tie. Both devices have something unique to offer. HTC One X is more media-centric while the Galaxy S3 bears more weight on practicality.

In terms of screen size, Samsung’s flagship phone is a tad larger measuring 4.8 inches. HTC One X only has a 4.7” screen. HTC One X and SGS3 do have the same high-resolution 720p displays but their LCD panels tremendously affect output. The Super IPS LCD2 on HTC One X accounts for a brighter display but the Super AMOLED panel of SGS3 is more vivid and striking. HTC One X does have a slightly better pixel density (312ppi) which makes it almost impossible to distinguish pixels with the naked eye. The Galaxy S3 closely follows with 306ppi.

Moving on to other specs, quad-core processors were built into the two smartphones. Galaxy S3 has Samsung’s very own 1.4GHz Exynos 4 Quad. Meanwhile, HTC One X is powered by a 1.5GHz Tegra 3 processor. Furthermore, both HTC One X and SGS3 have 1GB RAM and NFC technology. They both have 8-megapixel shooters with autofocus and LED flash, capable of recording full HD (1080p) videos at 30 frames per second. The two also have front cameras but with varying specs. HTC One X has a lower-resolution 1.3-megapixel shooter while Samsung Galaxy S3 has a 2-megapixel camera up front. Both can be used for video chat and recording 720p videos at 30fps.

Internal storage is where you’ll start seeing the difference. HTC One X is limited to 32GB and there’s no way of expanding it further in the absence of a microSD card slot. Samsung Galaxy S3 will be offered in 16GB, 32GB, and 64GB models and there’s a slot for expanding storage further with a microSD card. SGS3 also sports a beefier 2100mAh Lithium-Ion Battery while HTC One X just has 1800mAh juice. And while Corning Gorilla Glass protects the display of HTC One X, Gorilla Glass 2 makes the glass panel of Samsung Galaxy S3 tougher than its competitor. The only advantage of HTC One X over its competitor is its dedicated image processor.

WINNER: Samsung Galaxy S3. The hardware of HTC One X feels restricted. 32GB of internal storage sure is enough for storing media, app data, and other files but it’s always comforting to know you can count on expandable storage. If we set this matter aside, we still get a phone with a more vibrant display, healthier battery, and tougher Gorilla Glass to protect its high-resolution display.

We’re not as in love with Samsung Galaxy S3 when it comes to design but it’s a more practical choice over HTC One X judging by its hardware, software, and features. Unless you’re willing to trade these off for media-centric features, we can’t recommend it. With that being said, users who use their phones more for music, taking photos, or recording videos should opt for HTC One X. But they’ll have to rely on cloud storage once they reach the 32GB limit.