Trending
You are at:Home»Gadget Reviews»First impressions on Gajah’s child-friendly slate, another tablet for kids
By Gadgetman on Jun 12, 2012 · Gadget Reviews 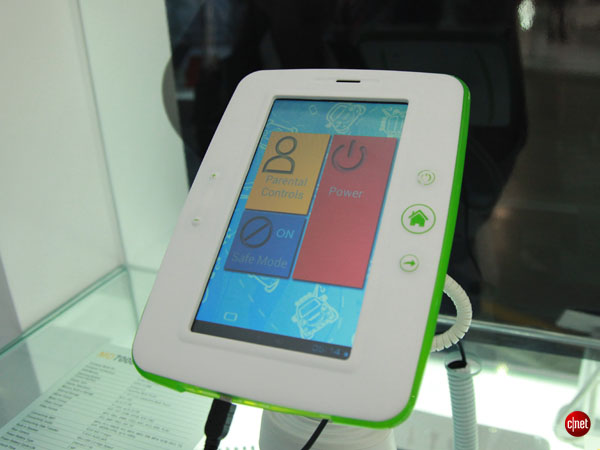 Tablets are today’s modern baby-sitters and nannies. They keep the little ones busy with eBook, educational games, and other child-friendly means of entertainment. Tablets for children certainly have a market but there’s only a few who dive into this niche. Most scramble to produce all-around tablet PCs but none of them are rugged enough to withstand drools, spillage, and a few bumps every now and then. Gajah International, a Singapore-based company, showed off a prototype that takes on this specific niche of tablets for kids.

Gajah International showcased a child-friendly tablet at Computex 2012 last week. The company has been recognized several times for their tablets and e-book readers. At the event, they did unveil a 6-inch e-book reader with a touch screen display, as well as a 9.7-inch Android tablet that ran Ice Cream Sandwich. But their take on a child-friendly tablet certainly caught our eye the most.

It has a 7-inch screen but it bares no resemblance to Archos Child Pad which by the way belongs to the same category of tablets for children. Little ones can hold the tablet by its side without getting the screen dirty thanks to the wide edges surrounding it on four sides. Buttons are easy to press and large enough for small fingers. There are three to the right of the screen which are Home, Back, and Power from top to bottom. Its plastic body makes it light to carry around or place on your kid’s lap. In case your kids get into a fight of who gets to play it first, the tablet has rubber bumpers.

Surely it was designed for children. It is mostly white and has lime green accents as seen on the buttons and rubber bumper. While white isn’t exactly a color choice parents would want, it is easy on the eyes of kids and looks playful to say the least.

With regards to hardware, all we know is that Gajah packed a single-core 1GHz processor inside the child-friendly tablet. Other specs include 512MB RAM and an internal storage of 32GB. It runs Android 4.0 Ice Cream Sandwich but was heavily skinned to catch the eye of youngsters. A quick look at its user interface and we saw large icons, text, as well as bright and colourful wallpapers. Parental features weren’t seen on the prototype but we expect it to be available for the final build.

The new childproof tablet by Gajah International is still under works but parents should look forward to it. Judging by how far it’s gone, it should be available later within the year. Parents of kids aged 1 year old and higher will find a companion in it. If you can’t wait for its release, you can go for Archos Child Pad which is sold for a budget-friendly price of $129. For parents of school children, there’s Intel Studybook.