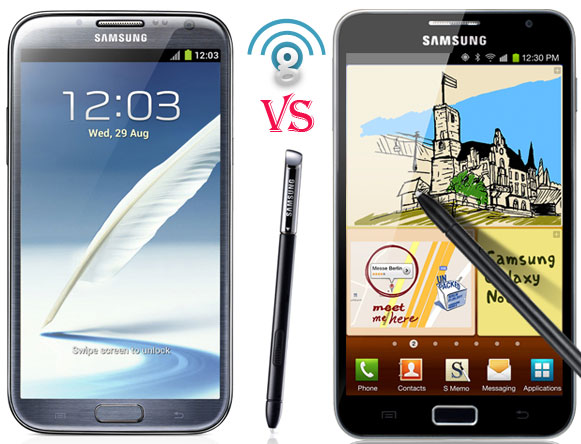 Samsung’s Galaxy Note is one of the most popular devices running Android right now, no doubt because it strikes a perfect balance between a smartphone and a tablet and also comes with a very useful stylus. When it first came out, people were skeptical about its success, but after a while, it became clear that Samsung had a real winner on their hands.

But it’s been a whole year since the Galaxy Note was released and that means it’s about time Samsung released an update. They did not disappoint: the Galaxy Note 2 was announced just a while ago and it definitely looks pretty good. But is it worth upgrading from the first model? Let’s see what has changed, do a short comparison and find out.

The Galaxy Note 2 is very similar to the Galaxy Note when it comes to design, but that’s only because they both have a large display that barely fits inside the housing. If you take a closer look, you’ll see that the Note 2 is more of an oversized Galaxy S3, with slightly rounder corners and the same metallic frame with plastic back cover. The build quality is very similar between both devices, and while they’re made mostly out of plastic, they feel pretty sturdy.

As is the case with many smartphones and tablets, the biggest difference between the Galaxy Note and the new Galaxy Note 2 lies inside. First of all, Samsung replaced the old 5.3 inch, 1280×800 display with a 16:9 format 5.5 inch unit with a 1280×720 resolution. That may sound like a downgrade, but it’s actually very hard to tell the difference between the two. Both use Super AMOLED technology (although the Note 2 uses a slightly improved pixel matrix, according to Samsung) and have the same viewing angles, contrast, brightness and vivid colors.

The Galaxy Note 2 is definitely better when it comes to performance – it packs an Exynos 4 Quad SoC, with the processor cores running at 1.6 GHz, along with 2048 MB of RAM. That is noticeably better than the 1.4 GHz dual core and 1024 MB of RAM in the first Note. To compensate for the increased power consumption, Samsung used a larger 3100 mAh battery in the new phablet.
The rest of the specs are pretty much identical – you can see the full specs list below:

Since the Samsung Galaxy Note 2 is coming out just now, it will be shipping with Android 4.1 Jelly Bean out of the box. The new version of the OS will surprise you with its super smooth interface, but you will be able to experience the same thing on the first Galaxy Note with an OTA update that is coming soon (after the Note 2 launches, of course). Overall, the software side of both devices is very similar – there’s really not that much difference in this regard.

Since the Galaxy Note 2 is the newer device, it will be more expensive when it hits the stores in November, with the Galaxy Note becoming the cheaper option. This is pretty important, since you can have all the advantages of the Galaxy Note for a lower price. However, if you want the most high performance tablet/smartphone money can get, the Note 2 is a perfect choice – I still don’t think it’s worth upgrading if you already have a Galaxy Note, though.