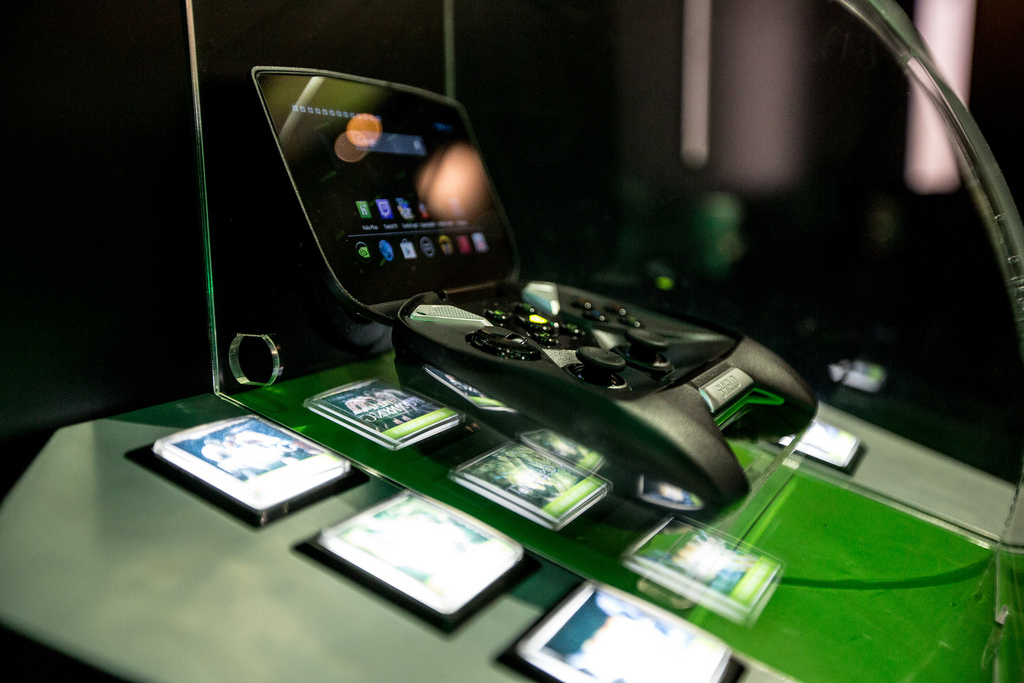 If you were always thinking about the fact that gamers need a more portable device that could do the same things that a gaming console could do, you might have been on the right track the whole while and now it looks like Nvidia is about to make that thought reality. The Nvidia Shield device sort of looks and sounds like a turbo charged smartphone, you cannot make calls from and a gaming console that any gamer would get plenty of use out of. Being dubbed the Swiss Army Knife of the handheld gaming consoles, the Shield makes use of wireless PC gaming and games that run on the Android Jelly Bean 4.2.1. software.

The handheld console comes with a 5-inch display that supports multi-touch, dual analog sticks that most gamers are familiar with these days and eight-buttons to choose from while frantically trying to survive, win or conquer whatever game it is that you are playing. The device is reasonably priced at just $300 and weighs less than 2 pounds so it is not like you are carrying around a heavy laptop. According to the marketing from Nvidia, the main selling point here is the wireless PC gaming that the game console supports. There are some requirements that consumers need to meet for the wireless gaming to work and that includes having a PC equipped with the Nvidia GeForce GTX 650 GPU or better.

With all of that aside, let’s talk about the device itself and whether or not it will be worth your time to pick one up or if you should just wait for the new Xbox One or PS4. When looking at a device like this you might want to know how it is built and whether or not it might be like carrying around a large pane of window glass. Well, the Nvidia Shield is light, but double the weight of the Sony Vita handheld system. Being 1.5 pounds or so is not going to cause too much fatigue when it comes to long gaming sessions, but it would not be as comfortable to use on the go compared to using it on the couch.

The display is 5-inches in size and comes with a 1280×720 resolution making PC games look awesome and Android based games looking even better. The IPS works with more than one angle and will stand up to any sun that it might get should you be gaming on your lunch break outside. The hinge supporting the display is huge and allows users to fix it where they want it and it stays put there. The clarity of the display allows users to see the screen without strain from several feet away. When it comes to the gamepad part of the device, it looks very similar to that of the Xbox 360 which millions of us are used to. The analog sticks have to be situated in such a fashion to allow for the screen to close so they are recessed a bit for comfort as well.

The ABXY buttons placed on a flat plane and are a little smoother compared to the way the Xbox 360 controller layout is. The trigger buttons on the Shield device are clickable, but do seem to have more tension there than needed and could cause issues if a game requires the constant use of them. Probably one of the most important things with any portable device is the battery life. The 28.8Wh battery made it through about 10 hours of almost constant gaming, streaming and video games all while connected to a Wi-Fi network. Charging is taken care of through the microUSB port in the back of the device. A full charge takes about 3-5 hours to accomplish which is long for devices on the market today.

With access to PC and Android based games, plus recent Android software the Nvidia Shield is an up to date gaming system that is portable enough if you need one. The price tag is very reasonable for a device like this and even though it does not have a camera, it does offer plenty of impressive PC gaming and is easily recommended to gamers and content streamers alike.