Trending
You are at:Home»Apple»New iPad too hot to hold – should you worry?
By Gadgetman on Mar 22, 2012 · Apple 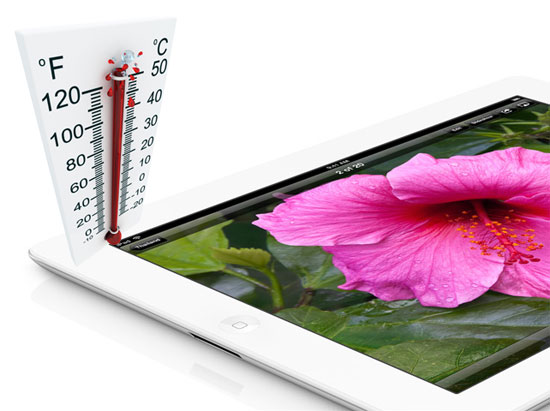 Apple has sold 3 million new iPads so far and owners are already complaining how hot it is – literally. Owners say their new iPads get unusually warm in contrast to iPad 2. When gadgets warm up, it could be a sign of overheating which will eventually damage hardware components. Should we be worried with the new iPad?

Using a digital meat thermometer, Rene Ritchie of iMore measured the temperature of a new iPad. Before use, its reading was 28°C (82°F). After a series of activities its temperature rose to 35°C (95°F) in 40 minutes. While on portrait mode, the new iPad was warmest on the left edge – the same side where chips powering the Retina Display, LTE radio, and quad-core graphics processor are located. iPhone 4S fared poorly reaching the same temperature within 5 minutes of use. Rene adds it gets hotter when tethering or on roaming. MacBook Pro was also tested and reached a 38°C (100.4°F) after watching a Flash video.

While no results were given for iPad and iPad 2, Rene gives us his word that the new iPad is indeed warmer than its predecessors. But he also points out that it’s just as hot as iPhones. As long as it stays that way and doesn’t reach feverish temperatures similar to the MacBook Pro, people shouldn’t be worried about their new iPads. Those who plan to buy it shouldn’t hesitate as well.

These past few days a series of tests were performed on the new iPad comparing its speakers, battery life, 3G/4G speeds, and Retina Display to iPad 2. Its battery life and speaker failed to impress us but with two times better graphics performance than Tegra 3, it’s a tradeoff anyone should be willing to take.