Trending
You are at:Home»Tablet Reviews»Toshiba AT300 – another Tegra-powered 10-inch slate on ICS?
By Gadgetman on May 25, 2012 · Tablet Reviews 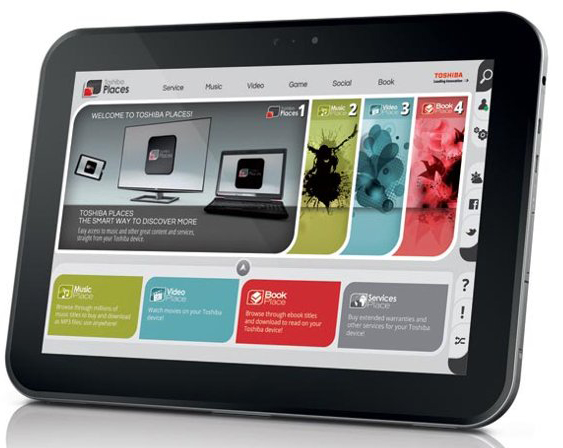 Toshiba AT300 is the European version of a 10-inch slate known as Excite 10 in the US. If you plan on using a tablet beyond web browsing – like watch a movie or listen to music on loudspeaker – you can put this in your list of must-haves. Gaming shouldn’t be a problem with it as it has the quad-core Tegra 3 processor under the hood. I’m not saying you get one though.

Toshiba AT300 is a bit old-fashioned in design and is nothing like the bold Motorola Xyboard 10.1. The display is surrounded by a bezel on all sides and is protected by the scratch-resistant Gorilla Glass. It has curved corners, blunt edges, and plenty of space for ports and expandable storage. While it looks boring from the front, its back has a little something extra. The smooth chrome edges – a standard in most slates – reach out to a textured, curved back. It is 8.95mm thick and weighs 590 grams. Given the weight and dimensions of AT300, Excite 10 LE remains as Toshiba’s thinnest and lightest slate.

The standard 10.1-inch screen on Toshiba AT300 has 1280 x 800 pixels. As a Tegra-powered slate, that makes it a quad-core beast. The processor is paired with 1GB of DDR3 memory. Internal storage includes 16GB and 32GB models. AT300 features dual cameras – a 5MP shooter on the back and a 2MP one at the front. It has a microUSB port, microHDMI output, audio in/out, dual SRS speakers, and an eMMC card slot expandable to 64GB. According to Toshiba, it can last up to 10 hours of video playback and 12 hours of audio playback with the screen turned off.

There’s nothing interesting going around with AT300 save for the dual SRS speakers. It’s latecomer in the pool of Tegra 3 powered slates running Ice Cream Sandwich. While Toshiba markets it as a media-centric device for watching movies, screen resolution is so-so due to the low pixel density. For regular use, this slate will surely suffice though. It is available in the UK for £329 for 16GB and £379 for the 32GB model.