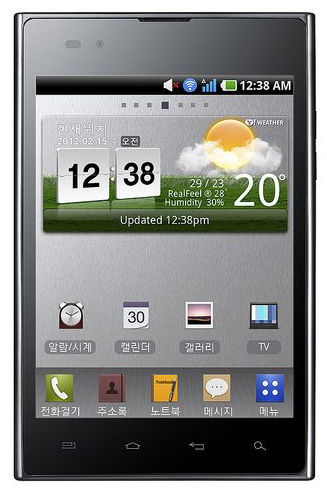 LG Optimus Vu is one of two smartphones with gigantic proportions; the other one being Samsung Galaxy Note. We couldn’t help but think of it as a rip-off considering it has a stylus and an app for taking handwritten notes and sketches. Since it is more recent and a 2012 release for that matter, one would naturally think it’s better than last year’s Galaxy Note. Sad to say it falls under the shadow of its contender when the note-taking feature is considered.

Optimus Vu is one odd looking phone and that could be a good or a bad thing, depending on your taste. It has sharp corners, flat edges, and a really wide screen. Its dimensions make it look like a square and its design can easily be mistaken for a mini-tablet. Despite its massive build, which by the way makes LG Optimus Vu impossible to operate with one hand, the smartphone is lightweight and slender enough to fit in your palm. Below the display are four widely spaced capacitive buttons for accessing Menu, Home, Back, and Search.

Over at the back is the rear camera with flash support. To its right is a slot for a mini-SIM card while there’s a volume rocker on the opposite side. On top you’ll find a 3.5mm jack, a micro UBS port, a shortcut key for accessing QuickMemo, a power button, and an embedded antenna which you can take out later for use. The back cover is made of plastic but it resembles leather. Even so, it isn’t enough to shake off the cheap feel of holding Optimus Vu in your hands.

The screen is pretty impressive. It measures 5 inches, has 1024 x 768 pixels, and features an IPS display. The size, coupled with 4:3 aspect ratio, makes surfing the web more comfortable. Unfortunately, it also fails to render content properly sometimes. Videos and apps appear stretched to fill the large display. When this happens, holding down the home button and selecting “aspect ratio correction” will fix it but I have to admit that the black space on the sides look awkward. While it doesn’t have as much pixels as LG Optimus 4X HD, the 650 nits backlight kept the display vivid and bright. The IPS display allowed wide viewing angles, even outdoors.

Powering the phone is a 1.5GHz dual-core processor. It doesn’t make LG Optimus Vu a powerhouse which is quite disappointing for a recent release. It is still snappy though and you may never feel the need for a quad-core CPU. Another disappointing spec is that it runs on Android 2.3 Gingerbread out of the box. Fortunately, you can upgrade to Ice Cream Sandwich once an update is available. Aside from the standard Google apps like Gmail and Play Store apps like Polaris Office for mobile office, RemoteCall for remotely accessing your phone, SmartShare for content sharing, LG SmartWorld for downloading apps and ringtones, a TV app for watching the video or listening to radio, QuickMemo for taking notes written with the hand or capacitive pen, and a video editing app are also pre-installed on the phone. Basic features of the phone include sending text, making calls, Bluetooth, WiFi, internet browsing, calculator, clock, calendar, alarm, memo pad, and a voice recorder.

Peeping from the back is an 8-megapixel camera with autofocus and LED flash. It features 15x digital zoom, geotagging, face tracking, a timer, continuous shooting, and panoramic shots. The exposure meter ranges from -2 to +2 and ISO options are auto, 100, 200, and 400. Image sizes range from 1280 x 960 to 3264 x 2448. White balance can be set to auto, cloudy, incandescent, fluorescent, and sunny and there are six more scene modes to choose from including normal, portrait, landscape, night, sports, and sunset. Finally you get to choose from four color effects which could be none, monochrome, sepia, or negative. Capable of recording 1080p HD videos, the camera has six more video sizes starting with QCIF. You can still use color effects, digital zoom, exposure meter, flash, and geotagging features during video record, as well as the additional option to mute audio recording.

The 1.3-megapixel front-facing camera has some similarities with the rear camera in terms of features. But instead of having six scene modes, it only has two. Image size is also limited to two – 640 x 480 and 1280 x 960. It does have additional features including beauty shot and mirror image. Beauty Shot allows you to adjust the brightness and blur the photo a little bit whereas Mirror Image flips the taken photo vertically.

LG Optimus Vu has Near-Field Communication (NFC) which allows it to communicate with compatible NFC-enabled devices. Three Tag+ stickers will be included in the package which you can use to set profiles. The tags have been labelled Sleep, Car, and Office mode however, forcing you to limit profile settings in these places. Also included is a capacitive stylus which LG calls. You’d have to carry it around separately though since it isn’t embedded into the phone. Other specs include 1GB RAM, an internal storage of 32GB, Bluetooth 3.0, and LTE connectivity. Since it has no card slot available, you won’t be able to expand it past the 32GB limit.

For a smartphone with limitations, LG Optimus Vu is rather expensive. You need to be able to overlook three things including lack of support for expandable storage, the screen’s aspect ratio, and a stylus which doesn’t quite match up to Samsung Galaxy Note. If you intend to focus more on taking notes, the Note still beats it hands down. It is not to be undermined however. NFC technology and LTE connectivity place it at a great advantage over most smartphones.