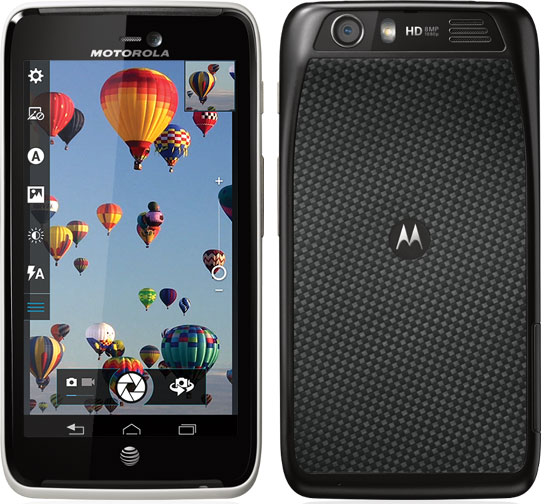 Big players like LG, HTC, Samsung, and Sony already made their contribution to the smartphone market in the first half of 2012 by releasing their flagship phones. All except one, that is. It wasn’t until recently that Motorola released their premier phone in the form of Atrix HD.

There’s not much originality when it comes to its design. Motorola Atrix HD is pretty much a super-sized version of Droid RAZR MAXX when viewed from the back. Its front was remade however as it has curved corners instead of an angular feel. Making up for this lack of originality is the handset’s sturdy build. Although made of plastic, the uniform structure, Kevlar back plating, and water-resistant coating of Atrix HD accounts for its superior build quality. Unfortunately, holding the phone with one hand seems a bit uncomfortable because of the large bezels around the screen.

While most Android smartphones have capacitive buttons for navigation, Motorola Atrix HD doesn’t have any. The bottom bezel is instead filled by the AT&T logo smacked right in the middle. Its power button and volume rocker are on the right side whereas to its left, there are plastic flaps for accessing the microSD and microSIM slots. The bottom edge is clean but on top you’ll find a 3.5mm headset jack and the microUSB port which doubles as a microHDMI output. Flip over the phone and you’ll see the camera, flash, and speaker grille all lined up on the topmost portion.

Motorola Atrix HD has a non-removable battery cover which explains why external access to the SIM and SD card is granted. You can choose from an all-black model and a dual-color version in black and white.

Atrix HD sets itself apart from its predecessors with ColorBoost TFT display. ColorBoost produces a vibrant display but it looks more natural than overly saturated AMOLED panels. Screen brightness is good and the viewing angles are decent. With its 1280 x 720 pixel resolution and 32i ppi density, you won’t be disappointed at all because these specs account for its sharp display and crisp but readable text. Sadly, the Gorilla Glass protecting the display is reflective so viewing under bright lights or direct sunlight proves difficult.

Its internal storage is sub-par at 8 GB and to make matters worse, bloatware takes up a huge chunk of it. Users are left with just 5 GB storage no thanks to all the preloaded apps. There to save the day is the microSD slot expandable to 32 GB. It has a gigabyte worth of RAM which remains to be a standard in high-end phones despite the emergence of 2 GB RAM on LG Optimus LTE II. It has Bluetooth 4.0 with A2DP, LE, and EDR for faster file transfers and it supports WiFi a/b/g/n. The phone may be used as a WiFi hotspot, allowing you to take advantage of its fast 3G and blazing fast 4G data by tethering them to other devices.

Motorola Atrix HD has a 1.3MP front-facing camera for video chat and taking self-portraits or small group shots. While it has an 8-megapixel camera on the rear, it doesn’t deliver photos as good as its rivals. The camera’s colour reproduction is poor as it creates bland images even in bright outdoors. Details aren’t captured very well too. Photos taken in dim places are even poorer in quality with their noticeable grain and noise. Using the flash won’t do much good as it results in pictures that look like they went through a vignette filter a.k.a. “that black shadow around the corners.” Its rear camera does capture 1080p videos smoothly at 29 fps. Unfortunately, the same gripes we have of its camera remain evident. In addition to these, panning too quickly often produces artifacts. The audio recording function that accompanies videos captures sound pretty well but it performs so poorly in filtering noise.

Powering the phone is a dual-core Snapdragon S4 chip clocked at 1.5 GHz. It has an Adreno 225 graphics processor which although doesn’t break grounds is still adequate for playing 3D games. Finally, Motorola Atrix HD runs the latest version of Android Ice Cream Sandwich (4.0.4). A Jelly Bean update is highly likely for this new release.

The first thing you’ll notice after unlocking the phone is the static bar on the bottom display. It has four on-screen buttons for navigation, a feature native to Ice Cream Sandwich. Overall, we’ve seen better user interface on Samsung TouchWiz, HTC Sense, and LG Optimus UI but to those who prefer a pure Android experience, Motorola Atrix HD dons an unmodified ICS experience. Well, almost. Motorola did make a minor change on the UI by adding a Circles widget. The widget displays information such as time, battery status, data consumed, and weather or temperatures. Since Motorola only made few changes on the UI, that means you’d be seeing the Holo Theme throughout the UI in its black-blue-and-grey goodness.

There’s nothing unique about the functionality of its system save for the SMART Actions app. The application enables users to optimize the phone’s battery life and performance with a few adjustments. AT&T preloaded its service applications on Atrix HD like the Code Scanner, FamilyMap, AT&T Messages, myAT&T, Navigator, Ready2Go, Smart WiFi, and U-Verse Live TV. Amazon Kindle, Qik Lite, Quick Office, Real Racing 2, and YPmobile are also pre-installed on the phone. All these apps are functional but they add massive bloatware to Motorola Atrix HD. As previously mentioned, these pre-installed applications eat up 3 GB off the internal storage.

You won’t be seeing the same 3,300 mAh battery of Droid RAZR MAXX on Atrix HD. Instead, Motorola crammed a 1,780 mAh battery in it. Being the massive phone that it is, Motorola Atrix HD couldn’t last an entire day on this battery even after a full charge. It falls behind competitors like Samsung Galaxy S3 and LG Optimus 4X HD which have 33% more juice. Performance-wise, its dual-core Snapdragon S4 processor means it can level up with its rivals even if they have quad-core CPUs. It doesn’t summon impressive scores on benchmarks and you might experience an occasional lag here and there. However, Atrix HD effortlessly performs tasks in most instances.

Motorola Atrix HD is no gem but on the bright side, AT&T only sells it for $99.99 on a two-year contract. It’s a bargain at this price but you’ll have to put up with its pitfalls like poor battery life and bland camera. In any case, Motorola hasn’t awakened from its deep slumber. It’s still in a coma if you ask me and there are better-valued phones on the market.