Trending
You are at:Home»Tablet Reviews»Google Nexus 7 – a review of the hottest tablet on the market
By Gadgetman on Aug 1, 2012 · Tablet Reviews 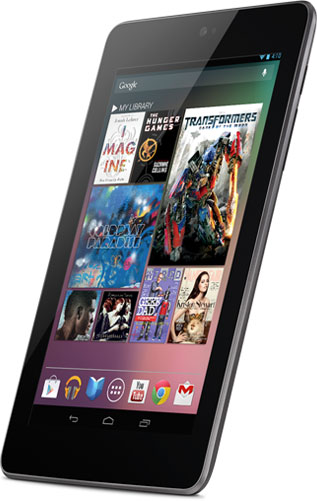 Google’s Nexus tablet has been a long time coming – rumors about it have been around since the Nexus One was released and they’ve only intensified when the iPad and the iPad 2 were breaking the records in sales. The tablet has finally materialized a couple of months ago, and now we can find it in stores under the Nexus 7 name – that is, if you can find it in stock, since it has sold out almost immediately all over the US!

The design of the Nexus 7 is nothing to write home about: it’s just your usual slate, with the touch screen on the front and a textured plastic cover on the back, which makes it easier to hold the tablet. Being a 7 inch device, it’s quite easy to use it with two or even one hand, although you’d have to have some pretty large hands to do the latter. The Nexus 7 looks a lot like other Asus tablets, which is not surprising seeing as it’s made by the same company. The tablet is pretty slim and light: it’s not comparable with the likes of the iPad and the Galaxy Tab 7.7, at 10.45 mm and 340 grams, it’s more than good enough for anyone. The quality is great despite the all-plastic build, and for the price, you really can’t find anything better.

Aside from the low price, the internal hardware is the Nexus 7’s most important selling point – Google really packed the best they could inside this affordable tablet. The main features of any tablet are the System-on-Chip and the display, and Google and Asus have definitely not skimped on them. The Nexus 7 has a 7 inch IPS LCD screen with a 1280×800 pixels resolution, which looks a lot better than the cheaper 1024×600 pixel units out there, and should be more than enough for any tasks – even though the display is smaller than the iPad’s 9.7 incher for example, the higher resolution makes it just as good.

The SoC inside the Nexus tablet is NVidia’s new Tegra 3 – the name alone says it all. The tablet has more than enough performance to run any kind of apps and is also very future proof thanks to its unlocked boot loader, which allows you to install custom ROMs and overclock the 1.3 GHz CPU to 1.6 GHz and beyond. The 1 GB of RAM is plenty enough at the moment, however the lack of a micro SD card slot is really limiting the device – the base 8 GB model might not be enough for long term use.

Another possible drawback is the lack of a camera on the back, however Asus has stated that they decided to leave it out because of the budget and because tablet users rarely use the back camera anyway (it’s true – who likes taking photos with a tablet, it just looks silly!).

Since there’s no cellular modem inside, the 4325 mAh battery is quoted to last up to 10 hours of continuous use, however the first users of the tablet are reporting 12-16 hours of normal use even with Wifi on, which is a pleasant surprise.

Being a Google device, the Nexus 7 is shipping with the latest version of Android – 4.1 Jelly Bean, which brings quite a lot of improvements over its predecessor. There are no interface customizations or third party apps – you get the Android experience as it was intended by Google. Jelly Bean has significantly improved the UI responsiveness and speed – everything is much smoother and faster, and navigating through the menus is simply a pleasure. Of course, all the other standard Android features are still present and they make the Nexus 7 worthy of purchase.

The price of the Nexus 7 is as low as it gets – $200 for the 8 GB model, which shoots the Kindle Fire right through the heart – there’s no reason to choose Amazon’s semi-tablet when you can have the real deal. The Nexus tablet is also a great alternative to the iPad – you get the same performance, more features, almost the same build quality for almost a third of the price!

It should not come as a surprise that the Nexus 7 is already selling out in stores, but even Google said they weren’t expecting the device to sell this well. At the moment, they’re still waiting for new units to ship, however they should be back in stock soon, so be sure to check the Google Play Store often – the Nexus 7 is definitely a must check out!