Trending
You are at:Home»Gadget Reviews»Windows RT – can it compete with Android and iOS on the tablets market?
By Gadgetman on Sep 25, 2012 · Gadget Reviews 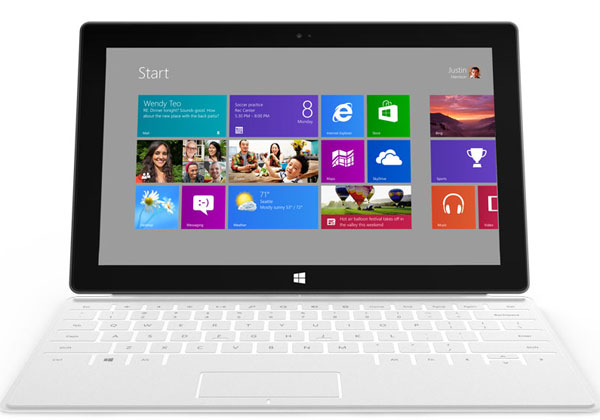 Microsoft has been on a roll for pretty much all of 2012, and they still have a lot of stuff to reveal. Everyone’s focus right now is on the Windows 8 family of operating systems – they bring enough innovative and simply new things to make them an object of interest for even the most bleak observer of the tech industry.

It’s been confirmed that Windows 8, Windows 8 Phone and Windows RT are coming this fall, and since we’ve already seen pretty much everything Windows 8 for x86 processors has to offer and have a good image of how Windows 8 Phone will operate (- like Windows 7 Phone, but with less bugs and more functionality), we’re more interested in Windows RT.

Despite the inconspicuous name, Windows RT actually carries a lot on its shoulders – it’s Microsoft’s first real foray into the consumer tablet market, and it has a lot to offer as a product for the buyers. The main question on everyone’s mind is, “can Windows RT actually compete with the established giants, Android and iOS?”.

It’s not that easy to answer that question. Windows RT is the first Windows ever for tablets and ultra-portable netbooks that have an ARM CPU inside, and despite that, most of the kernel and codebase is copied straight from the x86 version, which has a long history behind it and has grown into a very mature and capable operating system.

Windows RT promises to bring Metro UI (or as Microsoft calls it now, Windows 8 UI) to the masses, with tablets being priced well below the high price-points of x86 Windows tablets that are mostly used by the corporate world. At the same time, RT is a poor man’s version of the full Windows, offering less than half of the features that the x86 Windows 8 has.

The Metro interface is the center of attention, and it certainly has a lot of merits – it’s one of the most unique UIs on the market, and yet it’s easy and intuitive to use and looks very classy. The apps for it are pretty good, too – we’ve seen them on Windows 7 Phone, and it’s not hard to imagine the scaled up tablet versions running just as well. For the developers, Windows RT will be even better than Android and iOS – there are fewer restrictions and the development tools are generally better, as the early adopters will testify.

Microsoft is taking a very hands on approach with the hardware, as well: unlike Google’s Android, which can be installed by anyone on anything that has a processor, some RAM and storage space, Windows RT will only be allowed on tablets and “smartbooks” that meet the minimum hardware requirements set by the company, and they’re pretty strict. You can expect even the cheapest ($200-300) tablets to have a dual core processor, five point multitouch, GPS, NFC, 10 GB of free space, all the sensors you’d expect to find on a normal tablet, and a full-fledged USB host controller.

Now that the Nexus 7 has demonstrated that you can have all that in a sub $200 tablet, the above specs may not be impressive, but they’re certainly worthy of attention on a tablet running Windows.

Microsoft has already announced the Surface tablet, which will be the first device to run Windows RT, but until we actually get to test it, it’s hard to say whether the experience will be good or bad. I believe Windows RT has a good chance at shaking things up in the industry, and if Microsoft plays their cards right, they might just take back a big portion of the personal computing market.