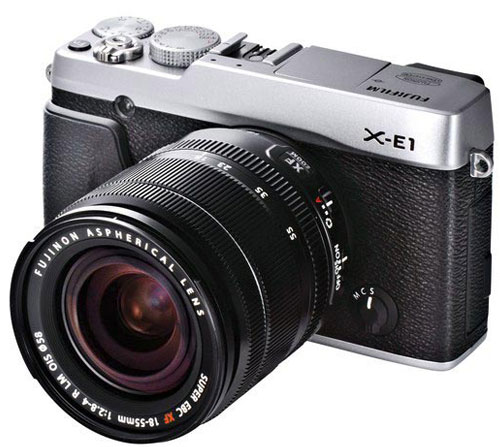 Fujifilm has really been on a roll these past two years when it comes to digital cameras. They’ve released several models that are very popular with the users, and they’ve also introduced several new technologies that help differentiate their products from the rest of the crowd. Fuji is no stranger to good design, either, with their X-Pro1 camera being the best demonstration of style and functionality, which made it one of the top choices for traveling photographers or enthusiasts who are looking for a camera that they won’t need to replace as their experience level grows.

But the X-Pro1 has a pretty big drawback, especially for the latter group: it has a high price! At $1700 for the body only, it’s definitely not the cheapest shooter around, and even though it’s an attractive device, many people would rather get a cheaper body and save the rest of the money for a good lens.

That’s why Fujifilm has just released the X-E1 – the X-Pro1’s affordable twin, which will retail for $1000 for the body only and $1400 with the basic (but pretty good) 18-55mm X-mount lens. The price is noticeably better, but what do you trade the reduction in price for? Let’s take a closer look at the X-E1 to find out.

On the outside, the new Fujifilm X-E1 looks pretty much the same as its more expensive relative, the X-Pro1. In fact, it looks exactly the same, but slimmer – the only changes are on the inside. The X-E1 retains the same metal construction and retro finish, complete with the analog dials for controls and two color variants, black and gray. The external controls are all in the same exact spots as they are on the X-Pro1, so for all intents and purposes, this camera is the X-Pro1 unless you tell people otherwise (or unless they notice the X-E1 marking on the front :-).

Thankfully for everyone who wanted an X-Pro1 but couldn’t afford it, Fujifilm has left all of the essential features intact in the cheaper X-E1. Pretty much the only things that are gone are the unique (and expensive) hybrid viewfinder, which has now been replaced with a simple all-electronic 2.36M OLED EVF, as well as the main display, which is now a smaller 2.8 inch unit with 460,000 dots resolution. This means that the exceptional picture quality is left intact, and the only ones who may be bothered by the downgrade in viewfinders are novice users, who wouldn’t really care about that in the first place.

The X-E1 actually has some unique features of its own: a built in pop-up flash, a 2.5 mm stereo microphone input (great for those who want to record the occasional video with high quality audio using an external mic, and the ability to use a remote shutter release. These features may actually turn out to make the X-E1 more popular than its predecessor.

The rest of the features remain the same – the X-E1 has the same sensor, lens mount, image processor, photo and video options and more. You can see the specs summary below:

The Fujifilm X-E1 is coming to the market by the end of the month, and it will make a great addition to the market, as well as a fierce competitor to all the semi-pro and enthusiast dSLRs. At $1000, you can easily add a good lens or two (especially using a lens adapter) until you get to the same price as the X-Pro1 body, which is simply great. The camera is perfect for beginner photographers, enthusiasts, as well as professionals who want a great travel or backup camera with them at all times.