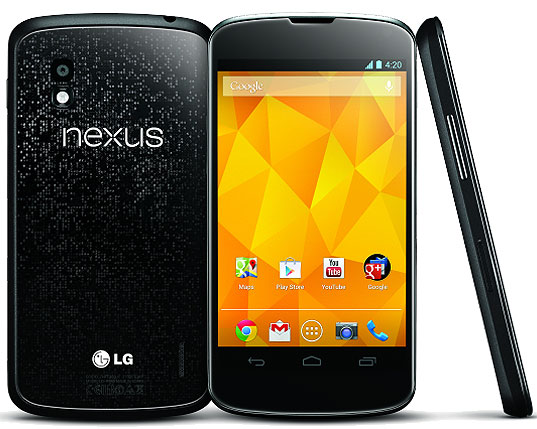 Ever since Google became a hardware maker, the Nexus line of smartphones (and now tablets) have been the flagship representatives of Android, featuring the latest version of the OS in all of its unmodified glory. However, the hardware itself was never top of the line, but Google seems to have changed their mind about that – the latest Nexus 10 tablet is one of the most impressive high end devices on the market with its 2K resolution display, 1.7 GHz Cortex-A15 Exynos processor and other top of the line specs.

On the smartphone side, the new Nexus 4 is also boasting some of the best hardware on the market, as well as a new sleek design that is sure to impress anyone – all of it packed in a surprisingly low priced package. Let’s see what the Nexus 4 presents to us in more detail.

The design of the Nexus devices has been heavily influenced by the manufacturer chosen to produce the hardware. The Nexus One had a strong resemblance to HTC’s other phones, the subsequent couple of models had the unmistakable Samsung lines (the Galaxy Nexus even bears their name), and I can say for sure that the Nexus 4 is the most unique Google phone to date – it’s made by LG, but it has an all new design that we’ve yet to see in the company’s other handsets.

The front is fully covered by a Gorilla Glass 2 sheet, with curved edges that makes it pleasant to use the touch screen, while the sides are a full metal frame that makes the phone sturdy, as well as attractive. The back cover deserves special attention: it’s a piece of glass (very much like the iPhone 4 and 4S) with sparkly dots all across the surface, which definitely looks unique. However, it is also the phone’s weak spot – websites and users are already reporting that the glass cracks even under normal use – whether that’s a defect or a general design flaw remains to be seen.

Otherwise, the Nexus 4 is one of the sleekest phones on the market, right up there with the iPhone 5 and the Droid DNA. It’s thin, it fits well in your hand and it is a pleasure to use – what more can you ask?

As I already mentioned, Google really went all out when it comes to hardware on the Nexus 4. The phone is decked with the latest technologies and features, and it’s definitely one of the top 3 phones on the market right now. The 4.7 inch display uses LG’s own IPS LCD panel and looks simply gorgeous with its 1280×768 pixels resolution – that’s a 318 DPI pixel density, just 8 dots shy of the iPhone 5’s 326 DPI. The picture quality is just as good as that on the iPhone 5, so you can imagine just how good it looks.

Performance won’t be a problem, either – the Nexus 4 features one of the most powerful platforms on the market – the Qualcomm Snapdragon S4 Pro APQ8064, which uses a quad core 1.5 GHz processor, the top of the line Adreno 320 GPU and 2048 MB of RAM, all fitted on less than 1 square inch of space inside the phone.

The other specs are equally impressive, although not that special. Depending on the model, you’ll get 8 or 16 GB of onboard storage space and sadly, no way to expand that. The Nexus 4 also features a 1.3 MP and 8 MP cameras set, a 2100 mAh battery that should be capable of up to 15 hours of use, all the usual sensors and radios (including NFC, Wifi N, Bluetooth, GPS+GLONASS), as well as a HSPA+ radio. What’s interesting is that 4G LTE functionality is also built in, just not activated – maybe developers will find a way to make it work – that would be simply awesome.

Being the flagship Android smartphone, it’s only natural that the Nexus 4 runs the latest version of the OS, just like its predecessors. The new phone comes with Android 4.1 pre-installed, with an immediate upgrade to 4.2 available – that’s the latest (and last!) version of Jelly Bean and it’s not yet available on any other device. It brings a few improvements, but nothing out of the ordinary. The UI is stock Android, and there’s thankfully no bloatware installed – you’re left to your own devices when it comes to the apps you want to install.

The Nexus 4 was launched just in time for the start of Holiday season last year, and while LG is experiencing a shortage of supply due to the very high demand, you can pre-order the phone online right now. And here’s the kicker – an unlocked unit without a contract will cost you only $299 or $349 for the 8 GB or 16 GB model, respectively. It’s impressive how Google managed to achieve that price point, however if you’re in the EU, things are not so clear – the phone costs up to twice as much depending on the country, and even in the UK you’ll be paying more due to the conversion rate. Still, the price is extremely low considering what you’re getting. Right now, the Nexus 4 is the leader on the worldwide Android smartphone market, although the Droid DNA gives it a hell of a time in the US.