Trending
You are at:Home»Tablet Reviews»Google Nexus 10 – Google’s bid to dominate the tablet market
By Gadgetman on Feb 6, 2013 · Tablet Reviews

Ever since the release of the Nexus One, Google has been a prominent player on the smartphones market, with all of the subsequent Nexus phones being touted as the flagships of Android (and that’s pretty much the gist of the situation). This year, the company also entered the tablet market with the Nexus 7, which immediately became one of the most popular tablets, with the stock selling out hours after it went on sale.

The Nexus 7 is a budget device, however, and Google doesn’t plan to stop there. Just a while ago, they also announced the Nexus 10 – a high end tablet that packs the latest hardware and software features, and which still costs less than its direct competitor, the iPad 4. The Nexus 10 is a very interesting device – let’s take a closer look to see exactly why. 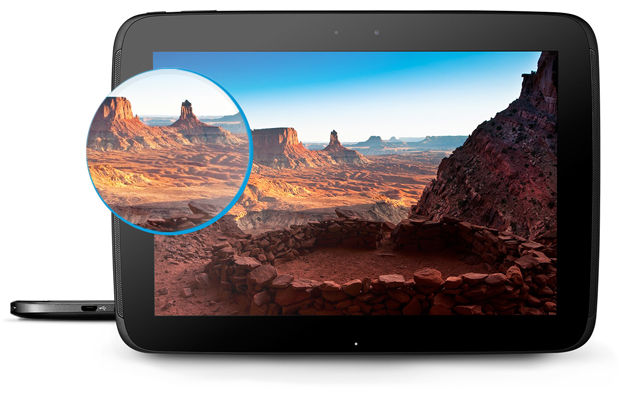 The Nexus 10 is not the prettiest or sleekest tablet you’ll see, that’s for sure. However, it’s got a very practical design, with a strong Gorilla Glass 2 on the front, soft matte black plastic on the back, a very slim 8.9 mm profile and two speakers on the front. It’s well thought out and it will help you get the most out of it when working and playing.

The build quality is great despite the materials used – you won’t encounter any flexes no matter how and where you use the device. Samsung really perfected the use of plastics for tablets and smartphones, and the Nexus 10 is only the latest in the line to prove it.

The hardware is the most impressive part of the Nexus 10 – the device is simply overflowing with the latest and greatest specs. Let’s start with the display: the Nexus 10 has a world first 10.1 inch PLS LCD display with a 2560×1600 pixels resolution – that is noticeably higher than the iPad 4 and at 300 DPI it’s truly a Retina Display. The 16:10 format is also perfect for work in both portrait an landscape modes and is both larger and better than the 16:9 format that seems to be used everywhere these days.

Now, the performance: there’s really nothing to worry about here, as the Nexus 10 uses one of the most powerful chipset in the world – Samsung’s own Exynos 5, with its two Cortex A15 (which touts a 40% improvement in performance over the older Cortex A9) cores running at 1.7 GHz, aided by a Mali T604 GPU and 2048 MB of RAM. The Exynos 5 is faster than the Tegra 3 and the Qualcomm S4, which is really impressive considering it only has two cores (which also helps it save a lot of power).

The other specifications may not be that eye-popping, but they are top of the line nonetheless: along with the usual Wifi N, Bluetooth 4.0, 16 or 32 GB of storage space (depends on the model), two cameras (1.9 MP on the front and 5.0 MP on the back), the Nexus 10 packs a GPS and GLONASS radios (which can work together for a fast and very accurate positioning), 4G LTE and HSPA+ radios, NFC, DLNA and HDMI out, as well as a micro USB port for charging (so you can use pretty much any charger).

The battery life won’t be a problem either – even though the 2560×1600 pixels consume a lot of energy, the dual core processor and massive 9000 mAh battery are more than enough to compensate for that. Google is quoting around 9 hours of continuous use, and seeing as they are competing with the iPad 4 here, I doubt they’re lying.

Obviously, the latest and greatest tablet packs the latest and greatest OS, as well. Android 4.2 comes pre-installed on the Nexus 10, with an update to the latest version already available as soon as you turn on the device. The interface is vanilla Android, there are no changes of course, so you get the full user experience as developers intended it. You’re also pretty much free to remove/disable and install whatever apps you want – there are no irremovable apps here.

The price of the Nexus 10 is especially enticing – for all the specs and the awesome display, you will still be paying $100 less than the iPad 4. The pricing starts at $399 for the 16 GB version and $499 for the 32 GB version – if you want the best tablet there is, this is it.