LG has been on the high horse lately on the mobile market, having released quite a few successful handsets, as well as several technologies that will bring a brighter future for smartphone and tablet owners all around the world. Having partnered with Google for the latest (and possibly greatest yet) Nexus smartphone, LG isn’t resting on their laurels – they’re still announcing new phones just about every week.

One of the latest releases is the Spectrum 2 – a pretty impressive high end phone that comes as a successor to the Spectrum, one of the first true LTE phones on Verizon’s network with a HD display and a new generation dual core processor. The Spectrum 2 features several improvements and brings a new design that will please your eyes. 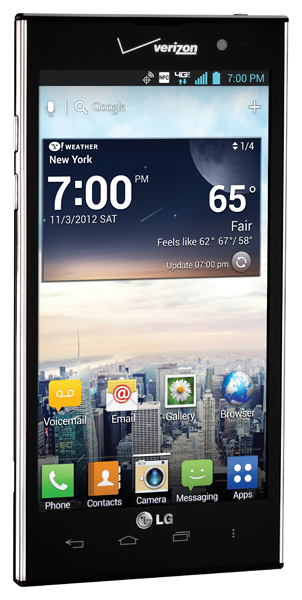 The LG Spectrum isn’t an ugly phone by any means, but it definitely doesn’t have anything special going for it. The Spectrum 2, on the other hand, features a more unique and attractive design that will attract more eyes for sure. The phone has similar design lines to LG’s other recent devices, with the front being fully covered by a glass, with the display underneath, the side frame being made of metal and the back cover having a textured finish that helps you keep the phone in your hands. The device feels and looks very solid, and frankly, it may be a better choice than the Nexus 4 with its glass back cover (which seems to crack at the lightest drop).

The Spectrum 2 has some great hardware to go along with the looks, as well. The phone is powered by a dual core Qualcomm Snapdragon processor running at 1.5 GHz, with the Adreno 225 GPU and 1024 MB of RAM in tow. It’s not top of the line by the latest measures, but it’s more than enough for any apps, at least for the foreseeable future.

The 4.7 inch display is a beauty to look at – everything is crystal clear and the viewing angles are great, even outdoors. Users also get 16 GB of onboard storage space, and thankfully LG included a micro SD card slot (which seems to have become a rarity nowadays) that can be used to upgrade the memory with up to 64 GB more.

The other hardware is pretty standard for a modern smartphone – there’s the usual Wifi N, Bluetooth 4.0, GPS, DLNA, and a bunch of sensors. The phone is 4G LTE capable, has an NFC radio, a large 2150 mAh that can keep it running for up to 11 hours and a wireless charger under the back cover – sadly, the wireless charger itself must be purchased separately (it’s unknown whether a third party model would work).

Despite the fact that Android Jelly Bean has been out for a while and the 4.2 update will be released any day now, the Spectrum 2 is rocking the tried and tested Ice Cream Sandwich – not necessarily a bad thing, but you’d better download the JB update as soon as it’s available since it brings a few significant improvements, including a more smooth and responsive user interface.

The LG Spectrum is just one of Verizon’s many offers since the last Holiday season, and at $100 with a contract, it’s certainly one of the more affordable ones. If you want a high end phone with all the bells and whistles and don’t require the fastest processor on the market, the Spectrum 2 is a perfect choice. It’s already on sale, so be sure to check it out, even if the Nexus 4 and HTCs Droid DNA seem like the obvious winner.