ZTE is one of those companies which don’t seem like anything special until you take a closer look. For the average user, they’re just another manufacturer of low end smartphones, 3G modems and some other accessories. But if you look closer, you’ll find out that ZTE is one of the biggest tech giants in the world – they manufacture everything from industrial telco equipment to consumer smartphones, tablets, computer parts, accessories and more.

The reason why their name isn’t everywhere is that they primarily deal with OEMs. However, just like Huawei and other Chinese companies, ZTE wants more control over their production line and market, so they’ve started to manufacture and sell devices under their own name. We already know they can make good low end and mid-range smartphones, and now the company is taking on the high end niche, as well, with a new sub-brand – Nubia.

The Z5 is the first phone to come out under the name, and it’s very impressive – it’s what you’d expect HTC or Apple or Samsung to come up with. Let’s take a closer look at the Nubia Z5 to see what makes it so special. 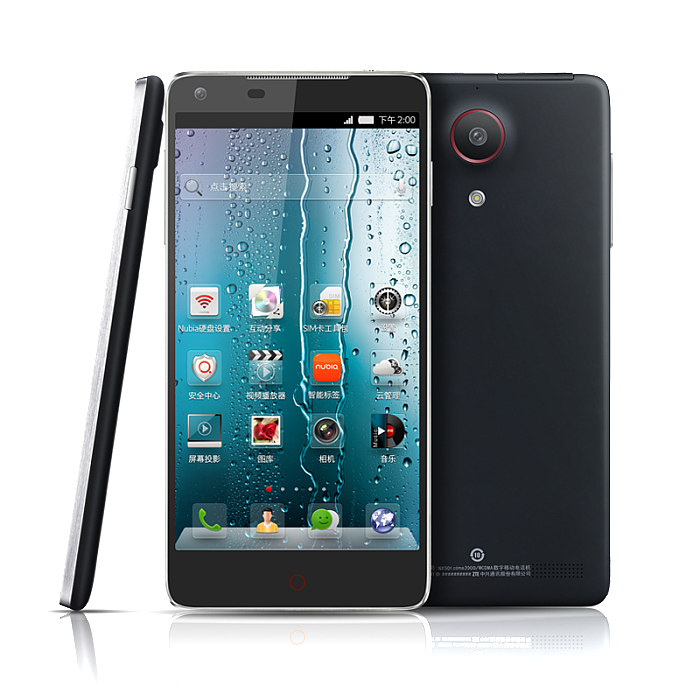 The Nubia Z5 was designed in collaboration with Stefano Giovannoni, an Italian designer whose portfolio includes the Google TV Smartbox, AlessiPhone, AlessiTab in the tech niche and many other products in the automotive and home appliance markets. He’s definitely done a good job with the Z5 – the minimalistic yet eye catching design befits a high end phone and can easily compare with Samsung’s Galaxy S3 and Apple’s iPhone 5, which are Nubia’s main competitors at the moment.

There’s not much you can work with on the outside of a modern smartphone, but the combination of a big display with narrow bezels (only 2.67 mm on the sides!), red accents around the camera and touch buttons, metal frame around the device, soft touch back and 7.6 mm thin profile (the same as the iPhone 5) is definitely enough to make a lasting impression – no wonder ZTE has decided to distance itself from the mainstream market by using a whole new brand name for the phone.

The biggest hardware feature of the Nubia Z5 is of course, the display – just a short while after HTC came out with the Full HD Droid DNA in the US, ZTE does the same in China. The Nubia Z5 packs a very similar 5.0 inch, 1920×1080 pixel display, which may even come from the same manufacturer as HTC’s, although ZTE assures us that’s not the case. The picture quality, clarity, viewing angles and contrast are all simply great – at the same level as HTC’s Droid DNA and very similar to the iPhone 5 (although the latter has more vivid color – whether that’s a good or bad thing is up to you to decide).

The other specs are also impressive, but nothing special nowadays. The Nubia Z5 is chockfull of the latest hardware, from a quad core 1.5 GHz Snapdragon processor to 2 GB of RAM, 32 GB of onboard storage (and sadly no micro SD card slot), Wi-Di, NFC, global radio, and a unique 13 Megapixel camera with Konica Minolta’s five element optics on the back. Despite the 7.6 mm thickness, the company managed to pack a large 2300 mAh battery under the hood, as well, which should last up to 12 hours of continuous use.

There’s no details on the software, but we do know the Nubia Z5 will be running Android 4.1 Jelly Bean out of the box, and from the demo unit, we can tell that ZTE is using a custom interface, as well. The UI looks a lot like MIUI, a very attractive Android build that is popular in China and can give both CyanogenMod AND iOS a run for their money. MIUI comes dangerously close to copying iOS, though, and it looks like ZTE doesn’t want the trouble – their UI definitely looks more unique.

The Nubia Z5 will be released only in China at first, which is not that surprising anymore – the country holds one of the largest numbers of iPhone users, after all. It should not be a problem to import the device if you really want it, though. The price for the base model is ￥3,456.00 yuan, with the fully decked version costing ￥7,890.00 yuan. Whether you appreciated the interesting numbers or not, that comes out to around $550 and $1260, respectively, and I’m guessing most people will choose the former. Overall, the Nubia Z5 is a perfect entrance on the high end scene, and ZTE looks like they can become the next Samsung if they keep this up – either way, the consumers win.