Sony Xperia Z Ultra waterproof
Sony’s Xperia Z was one of the first smartphones to feature a large 5.0 inch Full HD display, and it’s proven to be quite the capable handset. But Sony isn’t resting on their laurels – taking an example from Samsung, the company has decided to experiment with their device selection and enter niches that they previously deemed unworthy. 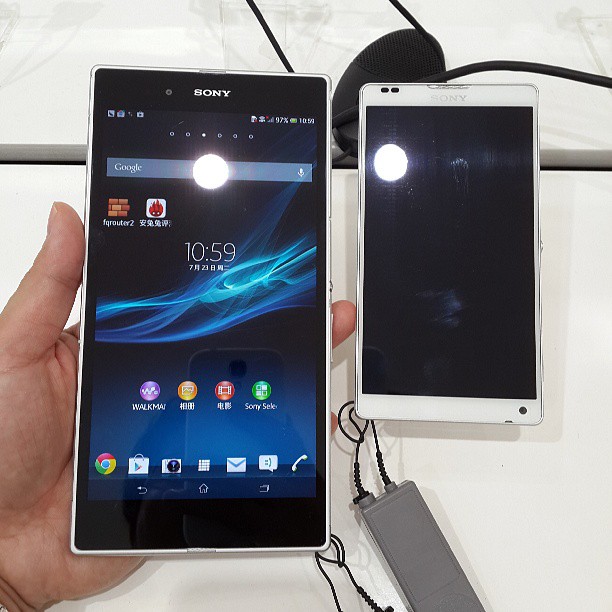 The decision is understandable – no longer can the company rely on style and brand name alone to drive the sales, as the ever increasing quality of competing phones is already going toe-to-toe with any Xperia phone, not to mention that Sony’s a bit overshadowed in the hardware specs and software departments.

As such, the newest smartphone from the company puts together the best stuff Sony has in a large but ultra-slim housing – the Xperia Z Ultra is a 6.4 inch phablet that’s packed with the best hardware and set to compete with the likes of the Galaxy Note.

Just like Sony’s other handsets, the Xperia Z Ultra has a very premium look and feel – it’s one of the most polished handsets we’ve seen, and it’s not only because of the iPhone 4 inspired glass back. The phone is very big – in fact, it’s quite a bit larger than it needs to be, especially since there are no dedicated navigation buttons at the bottom. 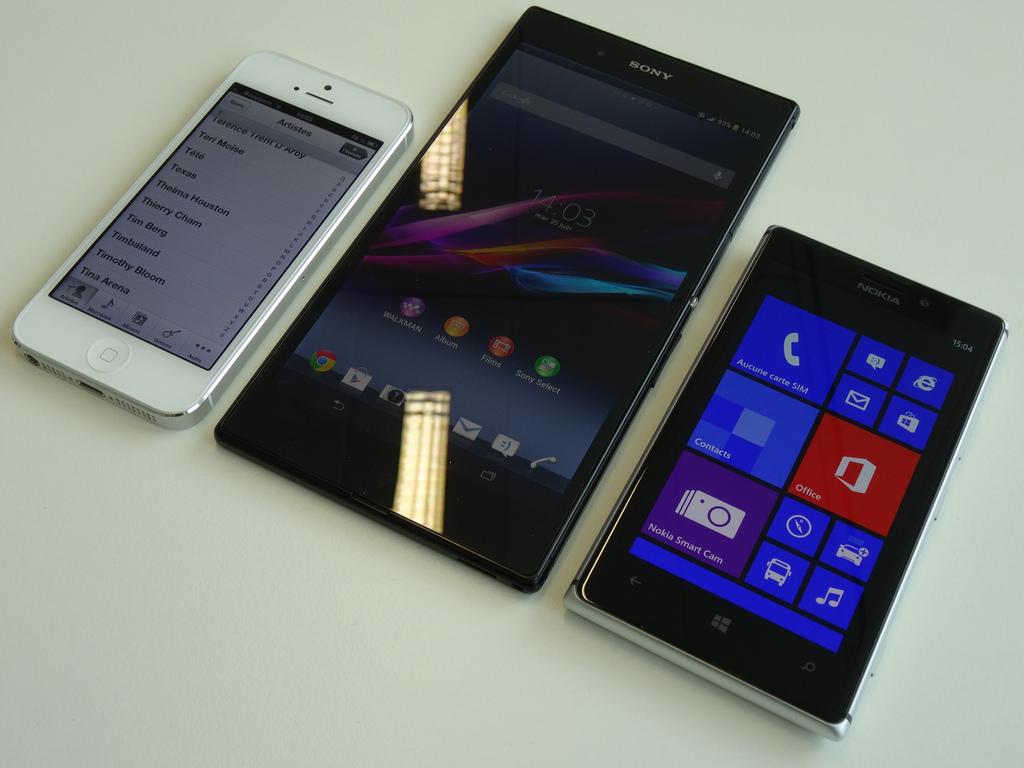 But there’s a reason for the length, and that’s the mind blowing 6.5 mm thickness (yes, it’s very close to the current iPod Touch with its 6.1 mm), which seems nigh impossible when you consider that there’s actually a lot of hardware under the hood, including the large display, the most powerful chipset in the mobile world and a 3000 mAh battery.

Despite the size and thickness, the phone is still pretty sturdy, mostly thanks to the metal and glass body – the internal frame is aluminum, with both the front and back being covered by a very large sheet of scratch and shatter resistant glass (I wonder if it’s a combo of DragonTrail and Gorilla glass, like on the Xperia Z). The sides of the Xperia Z Ultra deserve a mention – there wasn’t much to work with here, but the designers still made the tapered edges look like a miniature work of art.

While the device can be carried in most pockets, it is not a good idea to do so – if you sit on it by accident, you’ll get a bent phone in no time (assuming the glass does not crack). Thankfully, you can carry the phone in your hand without fear, as it is dust proof and water resistant, and it will most likely survive a fall from a couple of feet, too.

Needless to say, the Z Ultra is so big, it will look ridiculous when you actually use it as a phone – but Sony actually has that covered! Their solution is to include the SBH52 Bluetooth accessory with the phone, which can be used for voice calls instead. It’s a passable solution if you take a lot of phone calls, but carrying a second device that also needs to be charged is not the most appealing idea ever.

As I already mentioned, the Sony Xperia Z Ultra has some really nice hardware inside it – along with a few disappointments, as well. The main attraction is of course the 6.4 inch, 1920×1080 pixel display, which is very nice but not really top of the line. The reason for that is the use of a TFT LCD panel, which is most likely because of the thinness of the device. 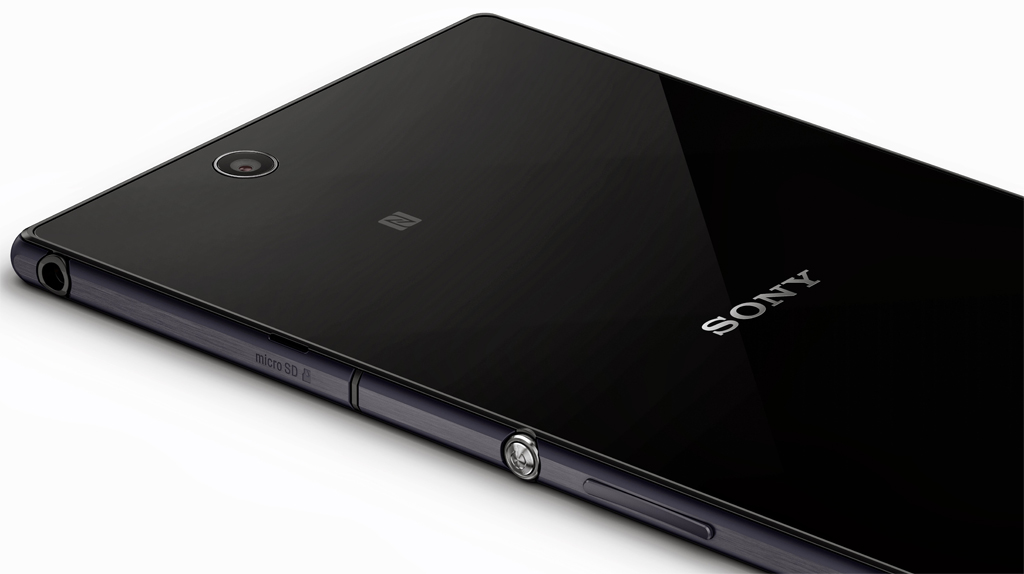 Sony also used their proprietary BRAVIA X-Reality Engine software to provide better colors and less blur, as well as the new Triluminos technology, which increases the color gamut and vividness on a hardware level. The end result is a TFT panel that almost looks like an IPS, except for the viewing angles – they’re not as bad as on the Xperia Z, but still not as good as the iPhone or any Galaxy S phone with an AMOLED.

The performance of the Xperia Z Ultra should be top of the line, for sure. That is thanks to the Snapdragon 800 chip – the best Qualcomm has to offer. In this case, the 4 processor cores run at 2.2 GHz, aided by 2 GB of RAM and the fast Adreno 330 GPU. Needless to say, the Xperia Z Ultra tops the benchmark charts in every category. I’m actually a little concerned about the heat – at this thickness, there’s no way the phone won’t get hot when playing games or watching YouTube videos via 3G. The phone also has 16 GB of onboard storage space, which is enough for starters – and you can increase that by up to 64 GB more with a micro SD card that fits neatly in a slot on the side of the phone.

As is normal on a modern smartphone, the Xperia Z Ultra has two cameras: an 8 Megapixels shooter on the back and a 2.0 Megapixels unit on the front, both of which support 1080p video recording. The bad thing about the main camera is that it’s smaller than the 13 Megapixels unit on the Xperia Z, and more importantly, it does not have an LED flash! It really couldn’t have been that hard to add it, so I don’t understand why Sony decided to skip on it – a lot of people use it quite often, not only for photos, but as a flashlight, too.

Connectivity wise, the Xperia Z Ultra has everything – Wifi AC, Bluetooth 4.0, NFC, micro USB with MHL support for HDMI out, HSPA+ 3G (up to 42/5.7 Mbps) and LTE (150/50 Mbps), GPS and GLONASS, as well as all the usual sensors that need to be on a phone. The battery is a large 3000 mAh that is said to last up to 14 hours of use on 3G – not bad for what is basically a small tablet, but I expect that number to be much lower if you actually do anything resource intensive.

The Sony Xperia Z Ultra is of course running the latest version of Android Jelly Bean. And just like the Xperia Z, the phone uses Sony’s customizations, which look rather nice. Everything works smoothly and there’s really not a lot to be said about the software that hasn’t been said before – it’s Android, after all, just install whatever apps you need and you’re good to go!

The Xperia Z Ultra is set to hit the shelves this September, so it’s still quite some time before we actually see it on sale. The phone is actually already available in some Asian countries, so if you really want it, you can always import it, but the duty on the $750 price tag will be pretty hefty. The phone will probably have a lower price when it launches in the west, as well, so if you want a premium phone/tablet hybrid that packs everything you can think of, it might be worth the wait.