Trending
You are at:Home»Tablet Reviews»Apple iPad 4 – disappointing, but an upgrade nonetheless
By Gadgetman on Jan 13, 2013 · Tablet Reviews 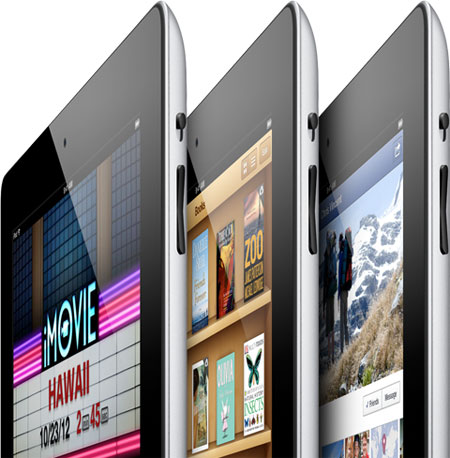 The iPad is still the most popular tablet on the market, all because Apple is amazingly good at marketing and retaining users. Having an easy to use interface definitely helped get them to this point, but the competition (Android and Windows RT) have already caught up in that regard and right now Apple needs to work harder to stay ahead. The iPad 3 was a pretty significant upgrade over the iPad 2, with a new processor, more RAM, better cameras and of course, the awesome Retina Display.

It seems that Apple is losing its touch however – they’ve broken the usual release cycle to announce not one but two new tablets just half a year after the iPad 3. The new iPad mini is actually a welcome addition, but in my opinion, the iPad 4 sadly does not deserve its name. While I think that “3S” would fit it better, the iPad 4 is the successor to the iPad 3, and while it’s minor, it’s an upgrade nonetheless. Let’s see what it has to offer for the users.

The design of the new iPad 4 is exactly the same as the iPad 3 – you won’t be able to tell them apart at a first glance. It’s got the same thickness and the same profile, with the only visible difference being the new Lightning port at the bottom (which will make Apple a small fortune in new cables and converters, just like it happened with the iPhone 5). That’s nothing unusual and to be expected, however, since this design is polished to perfection just like the MacBook Pro line. Besides, the main attraction of any tablet is the screen, and the iPad 4’s Retina Display doesn’t fail to impress in that category.

The hardware of the iPad 4 has hardly changed at all – the only improvements are the new Apple A6X processor, which is still dual core but runs at 1.4 GHz, giving it a small boost in performance, as well as a new front facing camera with auto focus. The rest of the hardware is exactly the same as the iPad 3 – the device has 1 GB of RAM, the same 9.7 inch 2048×1526 pixels IPS LCD display, 16/32/64 GB of onboard storage space, a 5 Megapixels camera on the back, and the usual sensors and radios (still no sign of NFC – I actually believe we’ll never see it on an Apple device).

There’s nothing new in the software department, either – the iPad 4 still runs iOS 6, which is still the simplest OS to use but not the most visually appealing anymore. Moreover, since Apple Maps was a pretty big failure (leading people way out in the woods, off the road, on the wrong tracks, missing landscape and routes – even the police recommended people not use it), Apple actually allowed the Google Maps app back on the iTunes Store, where it instantly became the number one app by downloads. It would be pretty funny except Apple really spent a lot of money on their navigation system (it’ll probably get better in the future, though).

The pricing of the iPad 4 is the same as the iPad 3 when it came out, which is good news – if you want to get an iPad 3, that is. Yes, the previous model is now cheaper, and it’s a better purchase in my opinion. The iPad 4’s only improvements are a new port that is incompatible with any accessories you might already have and a marginally better front facing camera – it’s technically an upgrade, but I’d say you should save the money and go with the iPad 3 or the iPad mini if you want something smaller and lighter.